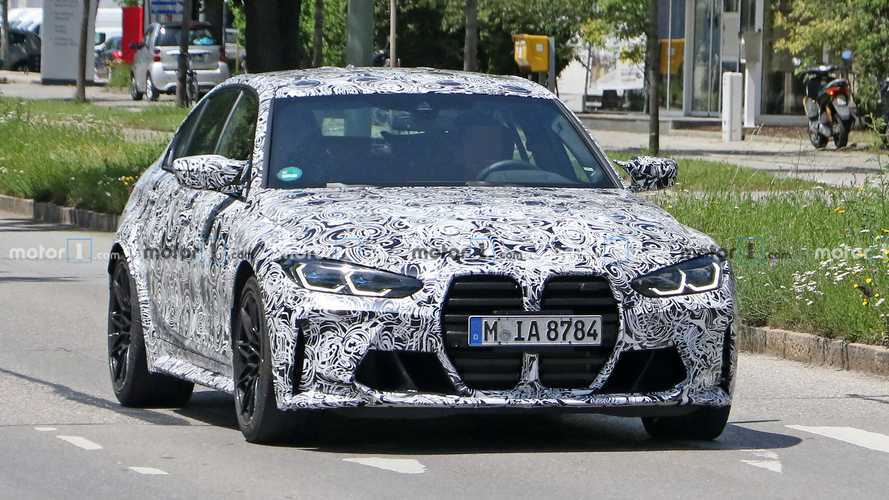 The prototype appears to have the full production body,

Not that we had any doubts, but yes, the new BMW M3 will use the same huge large front grille as its two-door M4 counterpart. We’re frankly still getting used to it and trying to understand why the saloon must go the same route as the coupe. After all, lesser 3 Series models – including the M340i – have a normal pair of kidneys, so the M3’s look-at-me fascia is not in line with the less spicy 3er flavours.

Now that we’ve taken care of the elephant in the room, it appears the prototype had the full production body and lights in the same vein as that M4 Coupe our spies caught last week. Despite the extended camo attire, the disguise is actually quite thin, therefore not really hiding much as we can see just about everything. From the beefy air intakes and wheel arches to the boot lid spoiler and the quad exhaust, you can easily tell this 3 Series sits at the top of the food chain.

The wait is nearly over:

It’s hard to tell whether we’re looking at the rear-wheel-drive version or the xDrive model, but if it’s the latter, the prototype doesn’t have a stick shift. That’s because BMW will pair the manual only with the RWD system as the two-pedal setup will be the only way to go if you want xDrive. A recent report states the Bavarian will prioritise the tail-happy model, with the AWD derivative to arrive at a later date.

BMW has teased both the new M3 Saloon and M4 Coupe ahead of a double reveal programmed for September. The M4 Convertible is expected to follow in 2021, while those rumours of an M4 Gran Coupe are likely unfounded. The swoopy shape will come with big power sans a combustion engine in the i4 also due sometime next year.

The pure electric BMW i4 is said to pack more punch than the M3/M4, with rumours suggesting it could have as much as 523 bhp. For the sake of comparison, the new M3 and M4 in Competition guise will boast a healthy 510 bhp to match the X3 M and X4 M Competition models launched about a year ago.