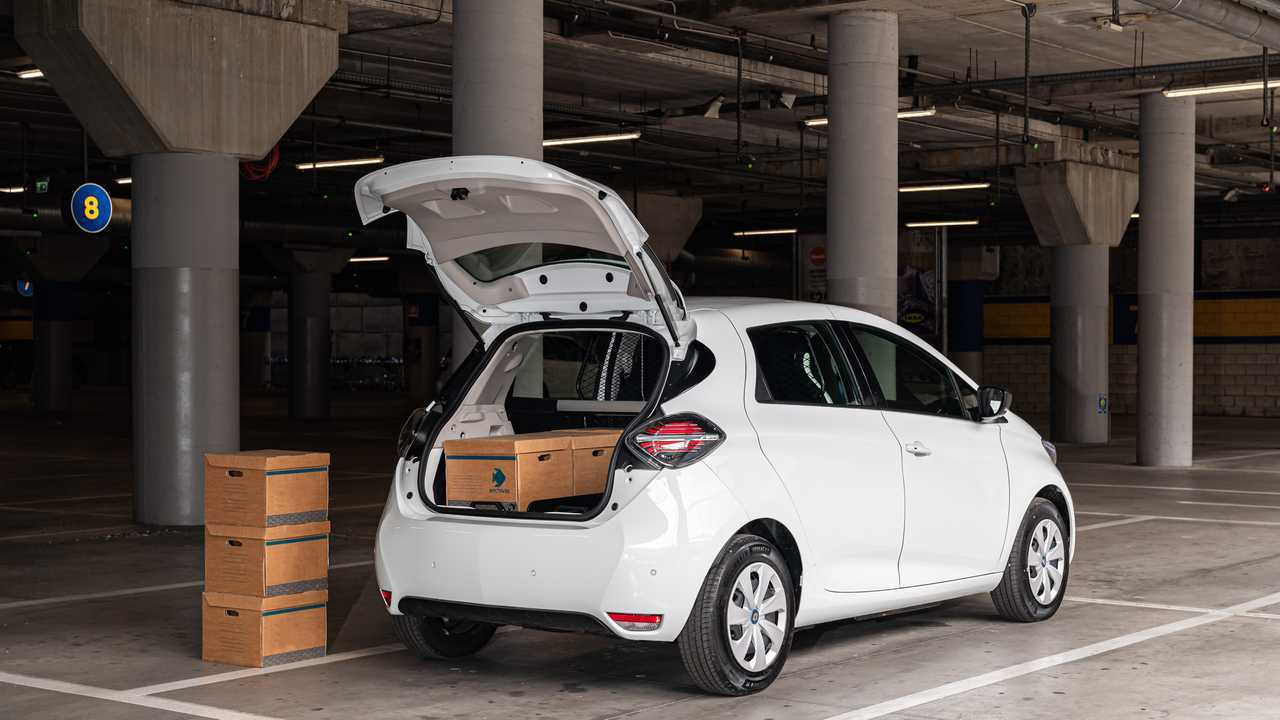 The little van will manage 245 miles on a single charge.

As with the passenger-carrying version of the Zoe, the diminutive van will manage 245 miles from a single charge of its 52 kWh battery pack. It also gets the 107 bhp R110 electric motor, which allows it to sprint from a standstill to 62 mph in 11.4 seconds. That may not sound that impressive, but Renault says the 3.9-second dash to 31 mph shows how the vehicle is suited to stop-start traffic and urban deliveries.

More on the Renault Zoe:

Renault received over 6,000 orders for new ZOE in October
⠀

Which used EV is best: BMW i3, Nissan LEAF or Renault Zoe?

Even more useful for local delivery drivers, however, will be the redesigned boot. By removing the rear seats, then replacing them with a completely flat load floor and mesh bulkhead behind the front seats, the French manufacturer has freed up a one-cubic-metre load bay. Access is possible not only through the tailgate, but also through the rear doors.

Two versions of the Zoe Van will be offered, with customers getting a choice of Business and Business+ models. Both will be offered with optional 50 kW charging capability, allowing the battery to be replenished from empty to 80 percent in an hour and 10 minutes from a rapid charger. Renault also claims 90 miles of range can be added in 30 minutes, although that is also dependent on the charger.

The Business model is the cheaper of the two versions, offering manual air conditioning and 15-inch steel wheels, but you still get automatic headlights and wipers. You get a seven-inch touchscreen infotainment system, too, not to mention the digital instrument cluster and keyless entry and start. There’s even a digital instrument cluster, along with cruise control and the Android Auto and Apple CarPlay smartphone integration systems.

All that comes with a price tag of just over £20,000 plus VAT once the government’s Plug-In Van Grant (PIVG) has been applied. If you are paying VAT, though, you’re looking at £25,180 (again, including the PIVG.

Alternatively, you can spend roughly £1,000 more on the Business+ model, which buys you satellite navigation, wireless phone charging and rear parking sensors. A reversing camera is fitted, too, while automatic climate control and 100-percent recycled seat upholstery also feature.

Externally, the top-of-the-range model is marked out by its 16-inch alloy wheels, while the driver will benefit from a range of assistance systems not available lower down the range. Lane departure warning and traffic sign recognition are both included, plus automatic headlights that can dip themselves when they detect an oncoming vehicle.