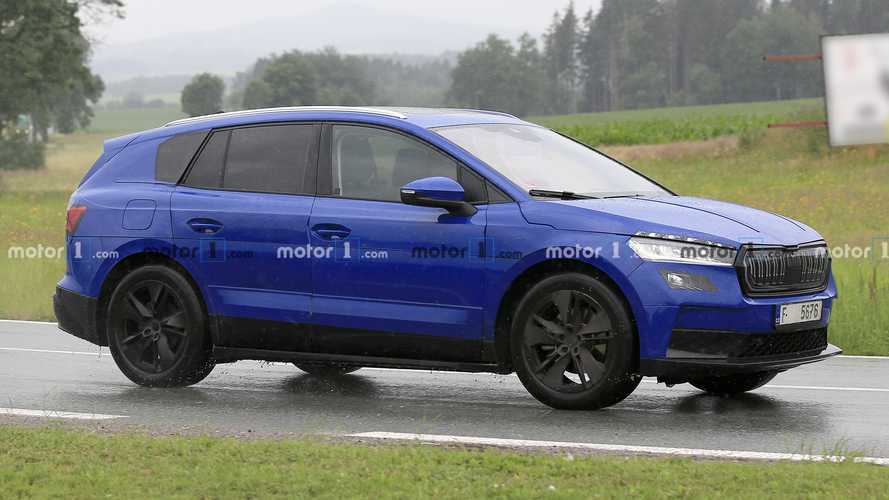 Deliveries are expected to start next year.

The 2021 Skoda Enyaq iV is an important model for the Czech brand. It'll see the return of a rear-wheel-drive platform and be one of the brand's most powerful production models ever. Spy photos have shown the crossover covered in swirly camouflage, but the latest shows the model wearing something that makes it look like it's been cobbled together by toddlers, which, honestly, would be impressive. However, it’s just some deceptive camo.

The Enyaq test vehicle in the vehicles looks too janky to be the final production body. Some of the lighting elements look like stickers, and you can spot a thin wrap covering the rearmost side windows. The black cladding along the bottom seems to be hiding the crossover's lower sills and bumpers. However, while the Enyaq and VW ID.4 will share VW Group's MEB electric-only platform underpinnings, it'll feature distinct styling as it's the production version of the automaker's Vision iV concept the company revealed last year.

Inside, passengers should be able to experience a spacious interior thanks to the lack of a transmission tunnel running through the car. It'll also depart from the brand's current interior design. It moves toward a minimalist look with a multi-level dashboard and a large free-standing central screen that'll likely house the media, HVAC, and various other vehicle controls.

Skoda is expected to offer two versions of the model – one with a single motor and one with two. The two-motor model could produce up to 302 bhp (225 kilowatts). However, those looking for the most range will likely gravitate toward the single-motor model, which rumours suggest will offer 311 miles (500 kilometres) of range.

Production for the Skoda Enyaq should start later this year. Sales and deliveries will likely begin in the first half of 2021. This will be one of at least 10 new electrified models Skoda plans to launch by the end of 2022 under its iV sub-brand.