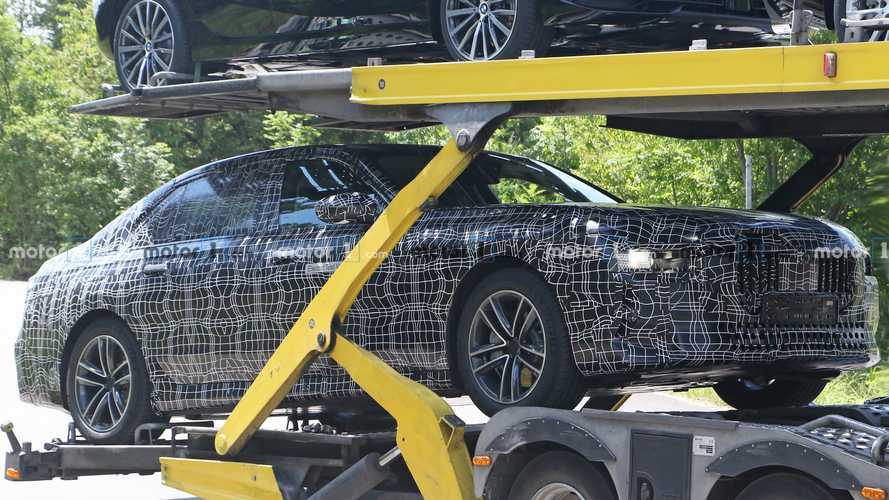 Spy photos of the BMW i7, the brand’s electric 7 Series, aren’t new. Images of the all-electric saloon emerged late last year, but at the time, it wore the body of the current 7 Series. That’s no longer the case. New spy photos show the BMW i7 covered in camouflage trying to hide its unique design, though there are some things the automaker can’t hide.

While we expect the i7 to share its look with the upcoming 7 Series update, it appears it’ll have some unique styling features. The front end is a bit more shark nosed than before with the headlights looking to sit lower on the face than before; however, they may not be production units or they’re part of BMW’s camouflage. We can also spot a new design for the door handles.

One thing BMW couldn’t hide well were the multiple cameras on the outside of the car, which could hint at the model’s potential to offer partially self-driving technologies. BMW would be following other luxury automakers that are increasingly focusing on infusing such technology into their top models. There appears to be a camera just above the grille, one in the shark fin antenna, and one on each front wing/fender. There are also seems to be sensors along the car’s side sills, too.

Rumours persist that the new i7 will be the model’s most potent offering. Powertrain details remain corralled in the Speculation category. However, it could offer as much as 650 bhp (484 kilowatts) or more, supplanting the M760i with its twin-turbo 6.6-litre V12 engine as the car’s most potent option. Allegedly, the car’s battery pack could offer up to 400 miles (644 kilometres of range). BMW likely won’t confirm these details anytime soon as we don’t expect the i7 to arrive until 2022.