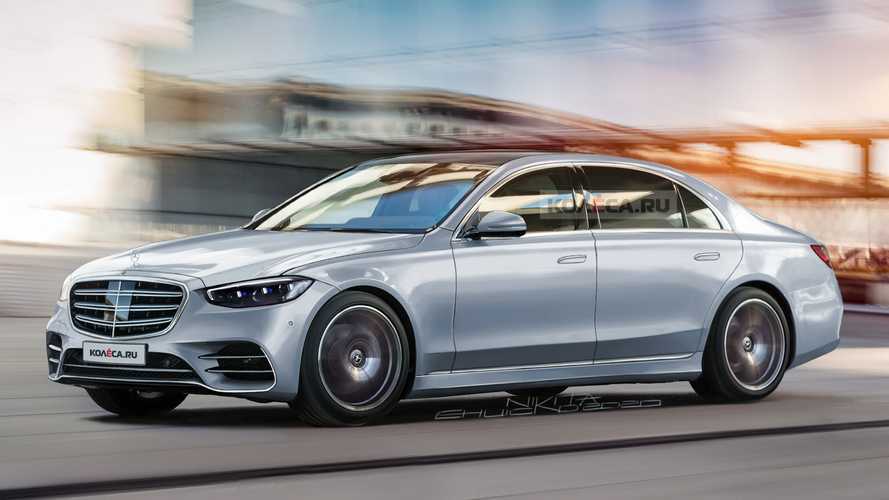 Attempting to see what Mercedes was hiding behind the camouflage.

Well, that was quick. Only a couple of days after we published revealing spy shots of the new Mercedes S-Class, the folks over at Kolesa have envisioned Daimler’s luxobarge without the disguise. People expecting the exterior to be just as revolutionary as the screen-heavy cabin will be disappointed to see the outer skin won’t stray away too far from the outgoing model.

That said, there will still be quite a few changes to the bodywork compared to the W222. As we pointed out in the article covering the spy shots, the pop-out door handles and flatter character lines will enable a cleaner side profile. Sharper-looking headlights and a revised large grille will give the S-Class a fresh face, while the wider taillights will make it more imposing from behind.

The W223 is inching closer:

Although not necessarily visible, the wheelbase will be slightly elongated to free up even more legroom for rear passengers. Should that not be enough, a long-wheelbase S-Class is planned and it will be joined by a further stretched Maybach variant set to get its own distinct styling features with a bespoke grille, wheels, and other tweaks.

We’re pretty sure some would’ve wanted a greater differentiation between the S-Class and the lesser models of the range. Although the E-Class facelift and CLS similarities are obvious, the new S does appear to distance itself more than the outgoing model did in relation to the E-Class and C-Class saloons.

What may look like a facelift of the W222 is actually an all-new car riding on a platform that has been in development since 2015. It will trickle down to other Mercedes models and will provide support for a Maybach-only V12 and AWD combo for the first time. The three-pointed star has been relatively coy on details regarding the underpinnings, but if history has taught us anything, it’s that a new S-Class usually brings vast improvements on all fronts over its predecessor.

We will have to wait until September to see the car in full, but Mercedes has promised to ease the wait by previewing its flagship on July 29 and once again on August 12 by revealing more images and details.

As you may recall, the next S-Class lineup could be greatly reduced beyond the already confirmed demise of the AMG S65. Rumour has it the slow-selling Coupe and Convertible body styles are not coming back for the new generation. Word on the street suggests Mercedes will indirectly replace the two-door models with the all-new AMG GT and SL.