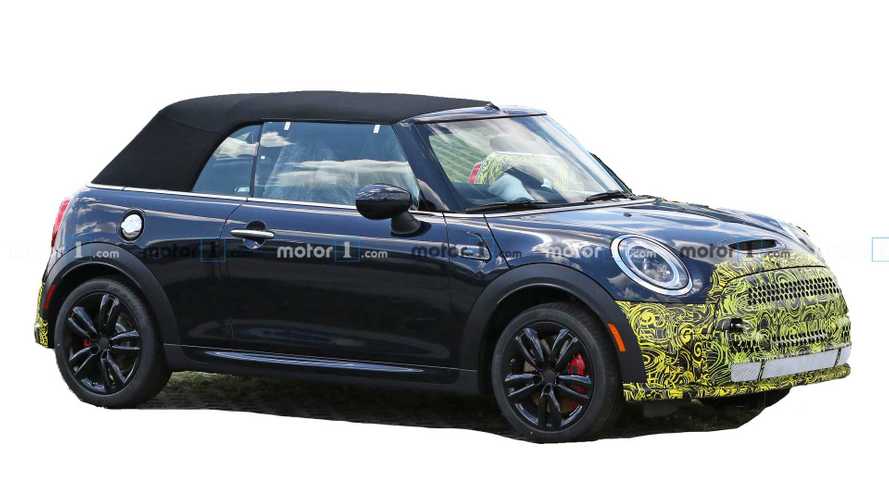 Over the next few years, we'll see Mini update many of its models instead of introducing all-new replacements. That includes the Mini Cooper Hardtop, which we've spotted already covered in camouflage. Now, it appears the convertible version will also get updated looks. New spy photos show two Mini Cooper Convertible test vehicles – one with a full wrap and another with its fascias covered.

The facelifts may come as a bit of surprise to fans who follow the Cooper model. Mini updated both two-door versions for 2019, but the two are due for a few more updates as BMW, Mini's parent company, looks to cut costs in the coming years. Brexit, slowing sales, the crossover and SUV boom, and the coronavirus pandemic have put a strain on Mini and others, putting the cost of developing an all-new Cooper out of reach for now.

When the updated Mini Cooper Convertible arrives – our photographers caught the Cooper S (full wrap) and the hotter Cooper S JCW (less camo) – it'll have an updated look. The camouflage hides Mini's updates to the model's design, though we expect new front and rear bumpers, an aggressively styled look, bigger intakes, and possibly a revised grille. Other updates include the side markers; however, it's still unclear if the car's other lighting elements will receive updated designs.

Mini's facelift means the Cooper Convertible will likely continue to use the same engines that are powering the model today. Interior changes will probably be kept to a minimum. The updated Cooper Convertible, and its other models, come at a time when Mini sales are suffering. Last year closed with the automaker down 4.1 percent in sales over 2018. The current economic situation certainly isn't helping the brand, and another mild facelift may not be enough to reinvigorate the Cooper lineup right now.