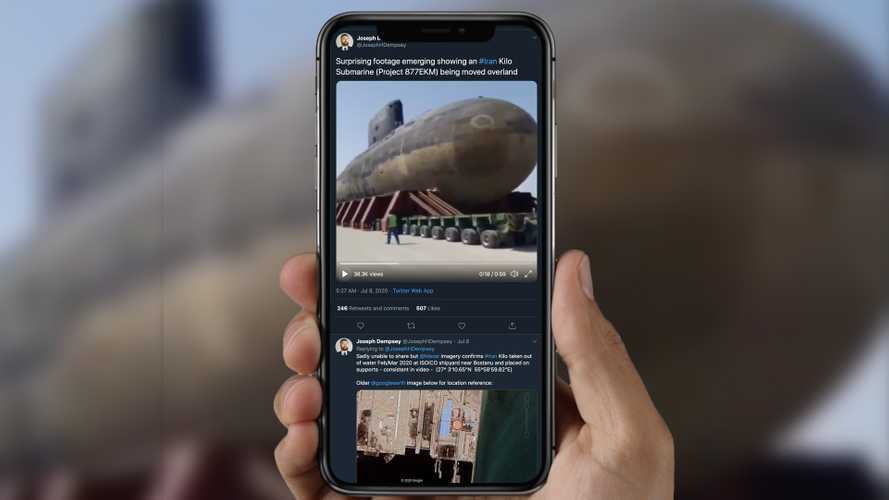 This isn’t something you see every day. Video out of Iran shows an attack submarine being towed across the Iranian desert. It’s a short video, failing to show much; however, it is long enough to make one wonder about the engineering that took place even to consider transporting it by lorries across the country. It’s a massive machine, tipping the scales at 2,300 tonnes. What’s towing it? A team of cargo lorries.

We can see at least two lorries daisy changed together that are attached to the massive makeshift trailer. It’s hard to tell how many wheels it has, though Popular Mechanics, which discovered the tweet, suggested a total of 88 wheels. However, we wouldn’t doubt if that number is closer to 100 considering the submarine’s length – 238 feet (72 metres). That’s still a lot of weight for each tyre to hold.

Rinspeed sQuba is the submarine Lotus Elise you forgot about

The submarine isn’t one to be reckoned with either. It’s a Kilo-class Russian-built sub that towers 32 feet (9.7 metres) tall and measures 19.6 feet (5.9 metres) wide. The Iranian navy bought three such subs in the early- to mid-1990s. It uses a crew of 52 and can stay out at sea for up to 45 days. It can reach depths up to 9,800-feet (3,000-metres) deep, tough these Tend operate much closer to shore than other attack submarines.

According to PopMech, Iran is moving the sub 15 miles (24 kilometres) from its Iran Shipbuilding & Offshore Industries Complex to its base at Bandar Abbas. However, it’s not clear why the ship couldn’t make it there by water. It’d seem that moving it by land would take considerable effort and coordination.

Either way, seeing the massive sub making its way down the road would be quite the sight to behold. Video isn’t the most accurate representation, though it’s difficult to deny how massive the sub still looks compared to the people walking around next to it.