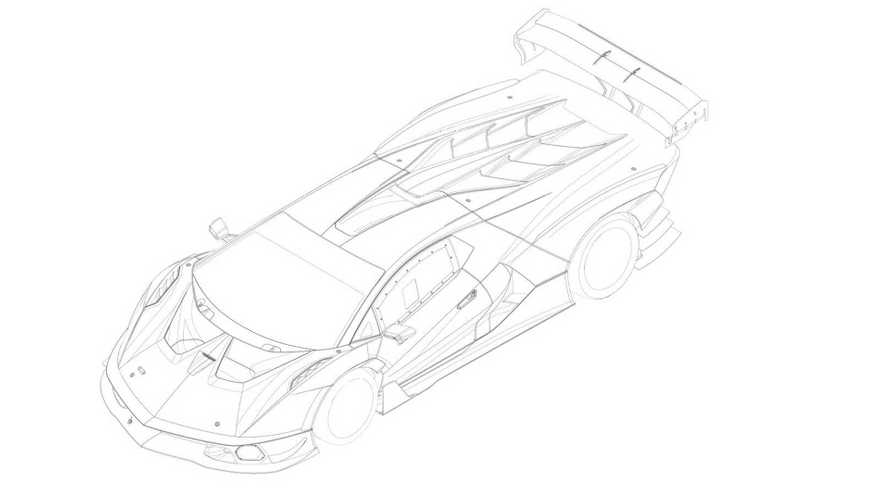 The crazy aero is even more evident in black and white.

Without even the slightest splash of colour, patent filings are usually quite bland compared to an actual image of the car. Well, that’s not the case here as the SCV12 depicted in black and white looks just as bonkers as the real thing covered in a funky wrap by Lamborghini Squadra Corse.

Discovered by a member of the Taycan EV Forum, the adjacent patent filing was actually registered with the European Union Intellectual Property back in July 2019.

Since the SCV12 is restricted to the track, it doesn’t have to comply with any pedestrian safety regulations, therefore Lamborghini’s racing arm had the freedom to go all out with the car’s shape. It doesn’t even have traditional headlights as all it has is a pair of small trapezoidal lights mounted low on the bumper.

Experience Lamborghini SCV12 while testing in this onboard video

Cooling ducts and vents are the main themes regardless of the angle, but the massive rear wing and diffuser are probably the most eye-catching features of the design. Lamborghini’s obsession with hexagons continues in the SCV12 if you look at the shape of the small taillights. The cannon-like dual exhaust tips are connected to the company’s most powerful V12 engine ever, delivering in excess of 830 raging bulls.

Put the SCV12 next to a “base” Aventador and the latter is going to look quite bland. There’s also the weight to take into consideration as we’re sure Lamborghini Squadra Corse has managed to shave off a lot of fat over the road-going model. As a refresher, the Aventador S has a dry weight of 1,575 kilograms (3,472 pounds). The fixed windows probably made from polycarbonate give us an idea about the Draconian diet the SCV12 has gone through in an attempt to squeeze every last drop of performance from the 10-year-old Aventador platform.

Combining so much power with a lower curb weight and downforce levels higher than those of a GT3 race car should translate into mind-blowing performances around a race track. This is a Lamborghini Squadra Corse vehicle through and through as it was developed by the same team in charge of the company’s race cars and will also be built by them at the factory in Sant’Agata Bolognese.

The official reveal is scheduled to take place later this summer when we're expecting low production numbers and an extremely high price tag. Oh, we almost forgot to say the SCV12 is going to be rear-wheel drive, with power delivered through a sequential six-speed gearbox taken from the Huracan Super Trofeo Evo.