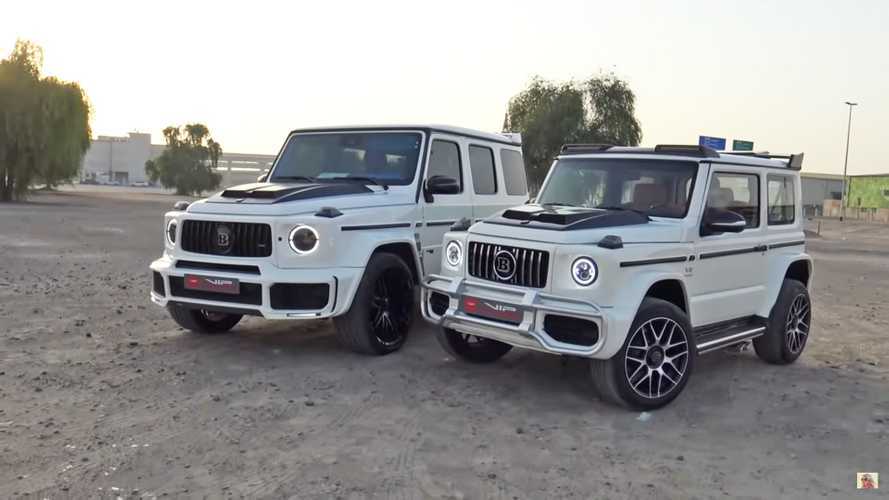 Just like the real thing in every way, except one-eighth the size.

[UPDATE]  Video embedded above has been removed from YouTube.

You know all about the Suzuki Jimny, and odds are, you love it. The plucky little off-roader is beyond popular in markets outside North America, so much so that presently, you can’t even buy a new one. That means folks looking for a square SUV are forced to plunk down considerably more cash for a Mercedes G-Class. This Brabus-tuned model looks a bit different though. Hey, wait a minute here!

This flashy white Brabus-badged SUV isn’t what it seems, in more ways than one. For starters, it’s actually a Suzuki Jimny and if the two-door configuration didn’t tip you off right away, Supercar Blondie stepping out and standing level with the roof should’ve been the clincher. The popular YouTuber slipped behind the wheel of this not-a-Jimny Jimny in Dubai, where she had occasion to line it up next to a real G-Class for comparison. Thing is, this Jimny isn’t a real Brabus, either.

The origin of this very convincing body kit isn’t known, but the video explains that Brabus does not modify Suzukis. That said, the detail in this faux Brabus conversion is extraordinary. The clip takes us through the Jimny's transformation and virtually every aspect on the exterior is a dead ringer for the beefy Brabus 800. The Jimny even wears slightly misleading biturbo V8 and 800 badges despite having its stock 1.5-litre engine under the bonnet. Obviously, horsepower isn’t even close to 800, but apparently the group behind this fake Brabus will install a turbo upgrade to give the Jimny 200 bhp.

We’ve seen plenty of Jimny body kits that mimic the look of the much larger G-Class, but we’ve never seen a Brabus clone done up in such detail. The interior gets a makeover too, though the Jimny layout for the dash still remains intact. Honestly, catching it at a glance on the road we can easily see anyone mistaking it for the real deal.