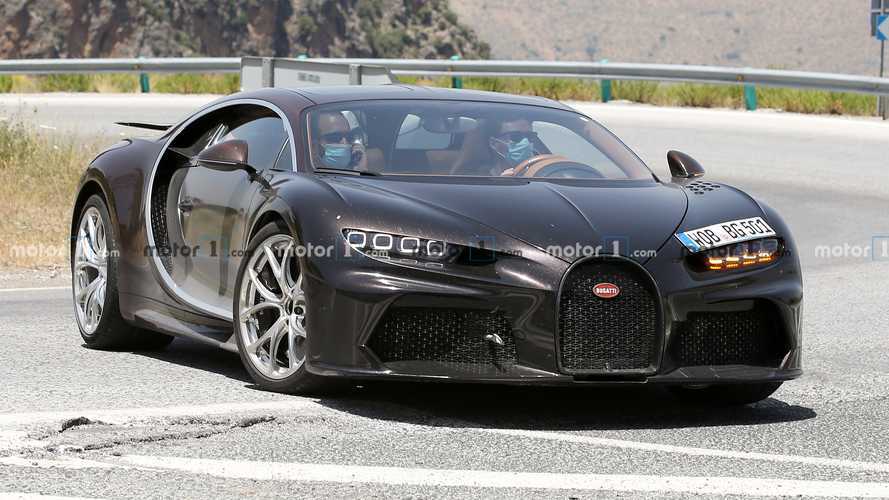 The nose is similar to the Super Sport 300+, and the back looks a little like the Pur Sport.

Bugatti keeps things interesting by making countless iterations of its hypercars, ranging from one-off colour combos to adding various performance components. These photos suggest that the brand has a new version of the Chiron under development, but its identity is a mystery at this time.

This Chiron wears a front end that's very similar to the Super Sport 300+. There are larger inlets in the front fascia than other variants of the hypercar, and the outer sections have pointed edges. The array of holes on top of the wings/fenders is also a styling cue straight from the Super Sport.

At the rear end, there are components that look similar to the Chiron Pur Sport. Two massive, oval-shaped exhausts emerge from the centre. Unlike the Pur Sport, the pieces here are entirely open, rather than having 3d-printed titanium covers over the outside.

Both variants have a large diffuser. However, the layout in these photos is slightly different by having a more rounded shape for the bodywork.

The Pur Sport's fixed wing is absent from this vehicle. The spy shots show the active wing extended and tucked into the body.

There is a rumour about Bugatti working on a one-off Chiron roadster, but we're pretty sure this isn't it, since there's a roof fixed in place. So what is this vehicle? The brand could be working on a more road-friendly version of the Pur Sport. Remove the wing, soften the suspension, and add some of the cushiness back to the cabin. Giving this variant the nose from the Super Sport 300+, would further differentiate the new model from other versions.

Like the name, there's no info about when this version of the Chiron might debut. Looking at the automotive event calendar through the rest of the year, there aren't many places for a physical unveiling because of cancellations surrounding the COVID-19 outbreak. This means the premiere might need to happen online.