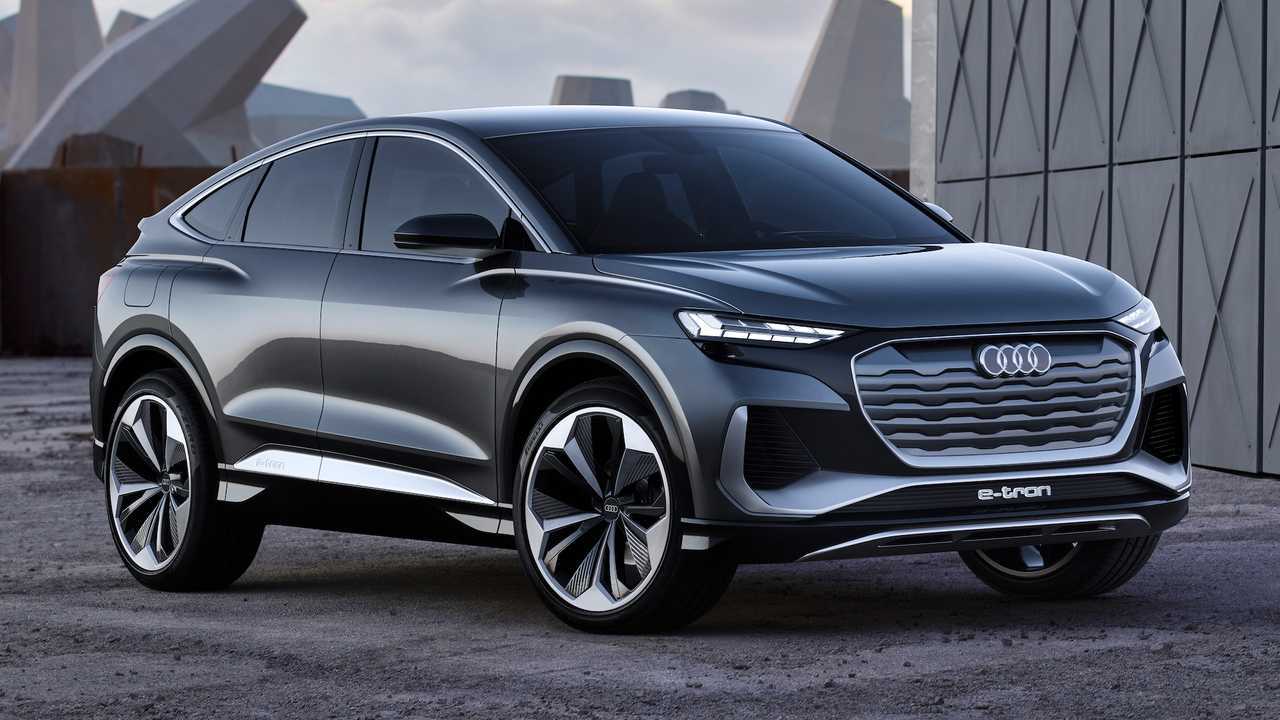 A sporty alternative to the traditional Q4 E-Tron concept.

Audi has a slew of electric vehicles on the way – the company promises 20 new EVs by the year 2025 alone. Last year we saw the E-Tron crossover go on sale –soon the E-Tron GT saloon will hit the market, too – and now the luxury automaker is adding another electric option to its growing portfolio

A riff on the more traditional Q4 concept Audi showed last year, the Q4 E-Tron Sportback is a sleek battery-powered SUV with sporty design cues both front and back. Elements like the sloped roofline and sharp silhouette make the Q4 E-Tron Sportback a "crossover coupe" by definition, putting the EV in a similar class stylistically to petrol-powered alternatives like the BMW X4, Mercedes-Benz GLC Coupe, and Porsche Macan. And that sleek new look gives the Q4 Sportback an overall drag coefficient of 0.26 – 0.01 better than the traditional Q4 E-Tron. But it's easy to mark the Q4 Sportback as part of the E-Tron family elsewhere.

The Sportback's faux "grille" with metal inserts looks similar to that of the normal E-Tron crossover and nearly identical to the Q4 E-Tron concept's fake grille. The slim LED headlights mimic the Q4 concept too, but we expect something closer to the E-Tron's light fixtures when the final production model rolls around. And the rear LED lightbar is a signature carryover from most Audi models.

Inside, Audi’s virtual cockpit also carries over. A 12.3-inch touchscreen is located front and centre, with an equally massive digital instrument cluster located behind the steering wheel. All that tech blends with a totally sustainable interior; Audi forgoes materials like chrome plating in place of paint and uses recycled materials on the seats and floorboards instead of leather.

Audi also says the Q4 E-Tron Sportback has one of the most spacious cabins in the class. The EV's 109.2-inch (2,774-millimetre) wheelbase and flat battery pack offer increased headroom and legroom, both front and back, compared to some of the alternatives. And like most Volkswagen Group EVs, the Q4 E-Tron Sportback uses the versatile modular electrification platform (MEB).

The Q4 E-Tron Sportback has an 82-kilowatt-hour battery pack and two electric motors: one on the front axle, and another on the rear. The electric motor in the rear produces 201 bhp (150 kilowatts), while the motor on the front axle adds an extra 100 bhp (75 kilowatts). That gives the E-Tron Sportback a combined output of 301 bhp (225 kW), with power travelling to all four wheels. With that, the Q4 Sportback will hit 62 miles per hour (100 kilometres per hour) in 6.3 seconds, and on to a restricted top speed of 111.8 mph (180 km/h).

The Sportback's total driving range is an estimated 280 miles (450 kilometres) on the European WLTP scale, though that number will be less on the US scale. But, with a maximum charging capacity of 125 kilowatts, it takes the Q4 just 30 minutes to reach an 80 percent charge.

But remember, this is just a concept. The production Audi Q4 E-Tron Sportback won't show up until either late-2020 early in 2021 before going on sale later next year.