The sportily styled N Line version of Hyundai’s i10 city car will go on sale at the end of July with prices starting at just over £16,000. Like other N Line models in Hyundai’s range, the newcomer gets internal and external design features taken from the i30 N hot hatchback, as well as some tweaks to the chassis.

From the outside, the little hatchback is set apart by its bespoke N Line front grille with integrated LED daytime running lights and its 16-inch N Line alloy wheels. There’s N Line badging on the front wings, too, as well as dual chrome exhaust tips, LED tail lights and red stripe on the front and rear bumpers.

More on the Hyundai i10: 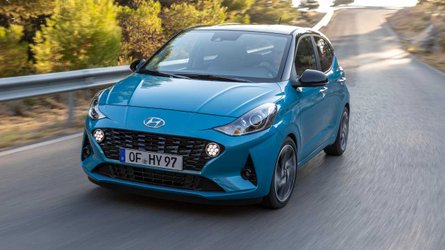 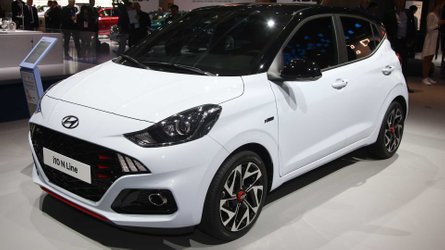 The cabin has been similarly upgraded, with an N-branded steering wheel and gear stick complementing, N Line cloth seats with red stitching. The red pinstripe of the exterior is mirrored inside with red trim on the air vents, and there’s a black roof lining to give the cabin a sportier ambience.

Those styling changes are supplemented by a standard specification that includes an eight-inch infotainment screen with the Android Auto and Apple CarPlay smartphone integration systems. As an option, buyers will also be able to specify an optional Tech Pack that adds satellite navigation and wireless phone charging, as well as a five-year subscription to Hyundai’s Bluelink telematics system.

Connecting the car to a smartphone-based app, the Bluelink system enables the driver to operate a number of vehicle functions from a distance, including locking the vehicle and accessing information on where the car is parked. The system will even tell the driver about any faults that will need addressing.

Other high-tech features can be found in the SmartSense safety package featured as standard on all i10s. That suite of safety systems includes lane departure warning and driver attention warning, plus autonomous emergency braking that automatically hits the brakes if it detects and impending collision.

Not all the i10 N Line’s features are so obvious, though. The N Line model comes with lightly fettled suspension that responds more quickly to bumps in the road and features completely new shock absorbers. There’s a new three-cylinder turbocharged petrol engine, too, which gives the i10 a bit more poke. With 99 bhp on tap, the T-GDi engine allows the i10 N Line to get from a standstill to 62 mph in 10.5 seconds, while the top speed is 115 mph.

“When we launched the all new i10 earlier this year, we brought to market a vehicle that combined the talents of a leading city car with the specification associated with cars from the class above,” said Ashley Andrew, the managing director of Hyundai Motor UK. “i10 N Line strengthens that proposition even further with its N influenced styling, higher performance from the T-GDi petrol engine and dynamic enhancements to the chassis.”