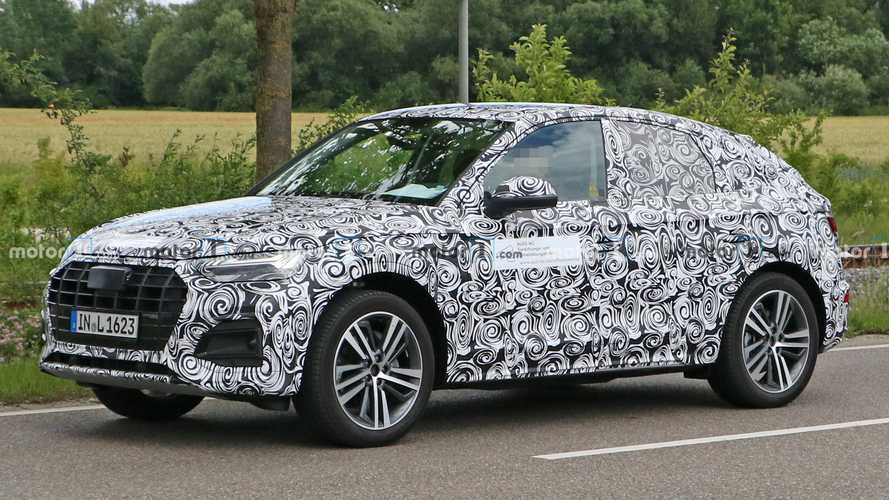 The regular Q5 will get a sleek-looking sibling.

Last month, Audi revealed the refreshed Q5 crossover. We thought the sportier-looking, coupe-like Q5 Sportback would also make an appearance, but it did not. Today, new spy photos show Audi is still developing the new crossover, continuing to hide it under a swirly camouflage wrap, though it's hard to dismiss the distinct sloping roof and hatch.

When the Q5 Sportback does arrive, it will feature the same updated front- and rear-end designs Audi gave the regular crossover. The two will also share an interior, though don't expect significant changes as the Q5 only went through a mid-cycle refresh. That means the Q5 Sportback will likely receive the company's latest MIB 3 infotainment system and its new 10.1-inch touchscreen.

The latest about the Audi Q5:

It should come packed with standard safety features, like lane departure warning, front and rear parking sensors, and blind-spot monitoring, all of which Audi made standard kit on the entry-level Q5. The Q5 Sportback should have similarly packaged features, like the Audi Virtual Cockpit available in the Premium Plus and Prestige models.

Powertrains should be the same, too, meaning the Sportback will feature an up-rated 2.0-litre four-cylinder diesel engine with peak power at 201 bhp and peak torque of 400 Nm. Available at a later date the Audi Q5 plug-in hybrid will return with a choice of two outputs.

When the Q5 Sportback arrives, it'll compete against the BMW X4 and Mercedes GLC Coupe, both of which start just north of £40,000. The 2021 Q5 will start at £42,950 OTR; however, expect the Q5 Sportback to have a higher starting price that should fall in line with its other German competitors. The regular 2021 Audi Q5 is scheduled to arrive in the UK at the end of this summer. The Q5 Sportback shouldn't be far behind, and we expect a reveal soon.