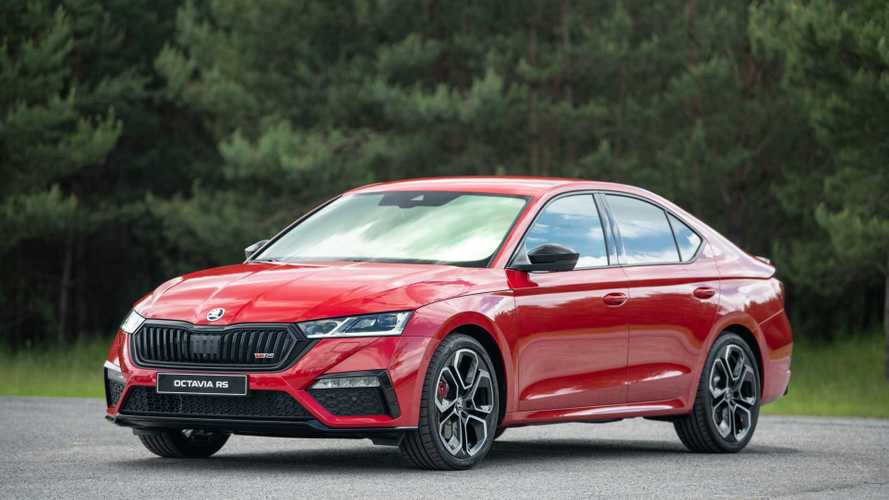 The most powerful diesel Octavia ever packs 200 hp and 295 lb-ft.

Precisely four months after introducing the Octavia RS iV plug-in hybrid, Skoda is now unveiling the conventionally powered versions. Naturally, the petrol and diesel derivatives look virtually the same as the electrified model, with the obvious removal of “iV” badging and the cap for the charging port on the front wing.

Essentially mirroring the Volkswagen Golf GTI and GTD, the Octavia RS in non-iV form can be had with a 2.0-litre TSI engine with 245 bhp and 273 lb-ft of torque. Available exclusively in front-wheel-drive form, the petrol-fueled version can be had with a choice between a six-speed manual and an optional seven-speed DSG. In terms of performance, the 0 to 62 mph takes 6.7 seconds en route to a top speed of 155 mph.

If you’d rather get the diesel, the 2.0 TDI packs 200 bhp and 295 lb-ft, thus making it the most powerful TDI-fueled Octavia ever built. It comes as standard with a FWD layout, but customers can spend extra on an AWD setup that enables a sprint in 6.8 seconds and a top speed of 151 mph. Bear in mind you can’t get the diesel with three pedals as Skoda will sell the Octavia RS TDI exclusively with the DSG.

All flavours of the RS come with progressive steering and a sport suspension boasting a multi-link rear setup, with the petrol and diesel models featuring a -15 millimeter ride height. At an additional cost, an optional electronically adaptable suspension (Dynamic Chassis Control) will be available. In the case of the TSI variant, a limited-slip differential comes with a wet multi-plate clutch.

Sitting at the top of the food chain, the RS models come generously equipped with the digital instrument cluster and the larger version of the infotainment system. In addition, they also get a standard centre airbag (a first for Skoda), specific 18- and 19-inch wheels, exclusive LED fog lights, and black exterior accents.

The more aggressive bumpers, dual exhaust tips, and the rear spoiler are also an RS-only affair, along with Alcantara surfaces and faux carbon fibre accents on the inside where the body-hugging seats that can be upgraded to include a massaging function. The driver’s display and the infotainment each come with RS-specific graphics to further separate the performance versions from their lesser siblings.

Having introduced the RS, Scout, and the G-Tec versions, the only member missing from the Octavia lineup is the upscale Laurin & Klement we’re expecting later in the car’s life cycle.