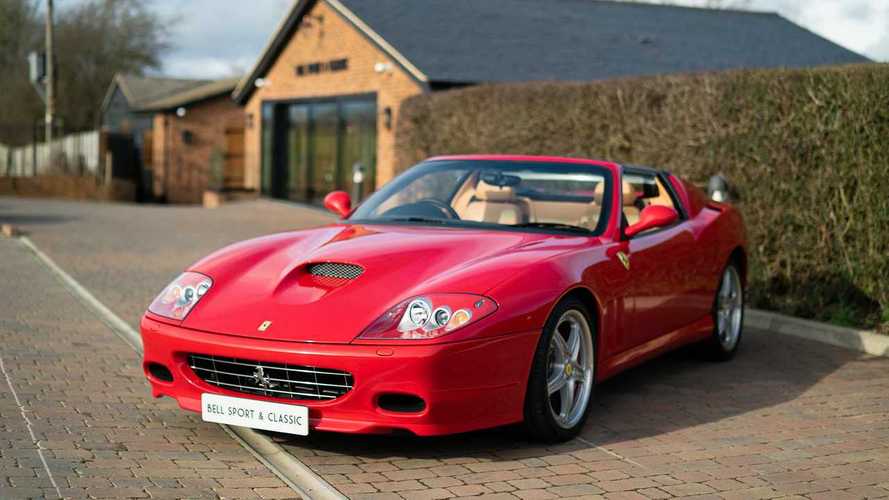 Probably the lowest-milage example to come up for sale.

Nowadays it seems like for every supercar churned out by a manufacturer, there's a unique limited edition model to go with it.

But back in the the 2000s, that wasn't necessarily the case, making cars like the Ferrari Superamerica not only extremely rare but highly desirable as well. Now an even rarer right hand drive version of the drop-top GT is hitting the market, via Bell Sport & Classic.

Ferrari F40 consumed by fire in Monaco may live again
⠀

The 2006 model, which has covered just 1,800 miles since leaving Ferrari's Maranello factory in 2006, is inspired by the legendary Ferrari 400 and 410 Superamericas of the 1950s and '60s. But this tribute act is perhaps best-known for its revolutionary roof, dubbed the Revochromico.

The Revochromico comprises of carbon fibre and electrochromatic glass, pivots 180 degrees to open or close, and once closed, the driver can opt for one of five opacity settings allowing varying levels of lite to break through into the cockpit. The grounbreaking technology was a first for a production car at the time. With a top speed of 199 mph, it was also the fastest convertible in the world at the time too.

That speed is achieved thanks to a 508 bhp, 5.7-litre V12 engine (pictured in another example below) mated to a six-speed Formula 1-derived semi-automatic gearbox.

The car on the market was first delivered on January 1 2006 by Graypaul Ferrari Nottingham. It comes with a full service history and comes exquisitely finished in Ferrari's famed Rosso Corsa with a beige leather interior.

"We are very pleased to offer for sale this exceptional Ferrari 575 Superamerica, what must be the lowest mileage right-hand-drive example available in the world right now," said Tim Kearns, managing director of Bell Sport and Classic. "It has been meticulously looked after by the original owner since it was delivered back in 2006 and is the perfect example to add to any collection."