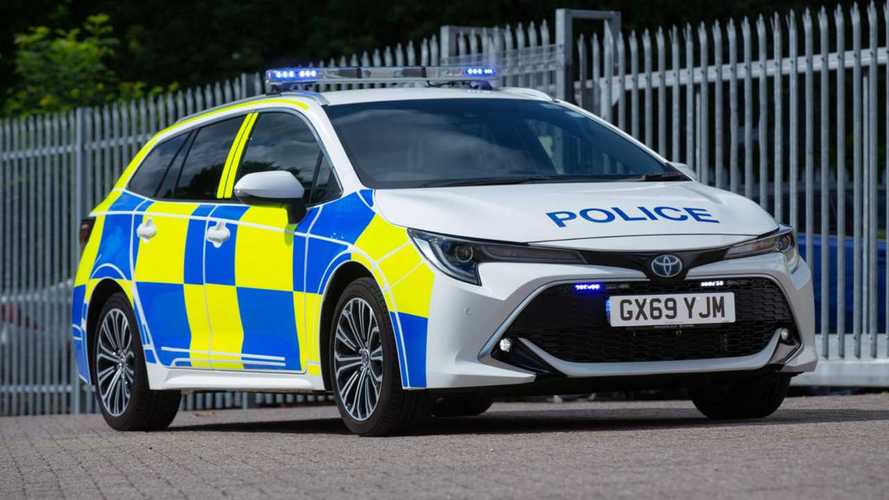 The estate model will be assessed by a number of regional police forces.

Toyota’s latest Corolla Touring Sports estate model is set to go on trial with a number of police forces to find out whether it will join their ranks. The hybrid-powered wagon will be assessed by regional police forces across the UK, with each assessing the vehicle’s suitability as a patrol car.

One vehicle is set to begin a series of month-long demonstration loans this week, giving each police force the chance to put it through its paces. Built at Toyota’s Burnaston factory in Derbyshire, the car has received a full ‘blue-light’ conversion to police specification.

That means the hybrid estate comes with a generic police ‘Battenburg’ livery, with reflective blue and yellow squares, while a roof light bar has also been added. Inside, the dashboard has been fitted with a control panel that sits between the steering wheel and infotainment screen and gives the driver control of the lighting system.

Aside from that, though, the car is more or less the same high-end Excel version of the Corolla Touring Sports you might find on a neighbour’s driveway. That means it comes with two-zone automatic air conditioning, a reversing camera and parking sensors front and rear. Satellite navigation is standard, too, alongside ‘keyless’ push-button ignition.

The police test car also gets the larger of the two hybrid powertrains available to Corolla customers. Pairing a 2-litre petrol engine with an electric motor to produce 181 bhp, the combination is also capable of between 50.4 and 56.4 mpg on the official WLTP fuel economy test.

That economy is partly thanks to the electric motor, which allows the car to drive short distances on electric power alone. Unlike a plug-in hybrid, though, the car cannot be charged from a plug and requires the engine or braking system to refill the small lithium-ion battery.

Stuart Ferma, the general manager for fleet at Toyota and sister brand Lexus, said the loans would show police forces the benefit of Toyota’s hybrid tech, as well as the Corolla’s practicality.

“The loan programme, supported by our public sector fleet specialists, will demonstrate the performance and practicality benefits of the Corolla hybrid, and how it can help police forces reduce their fleet emissions with tried-and-tested technology,” he said. “As a hybrid, it also provides more flexible performance compared to an all-electric vehicle and doesn’t require recharging facilities.”