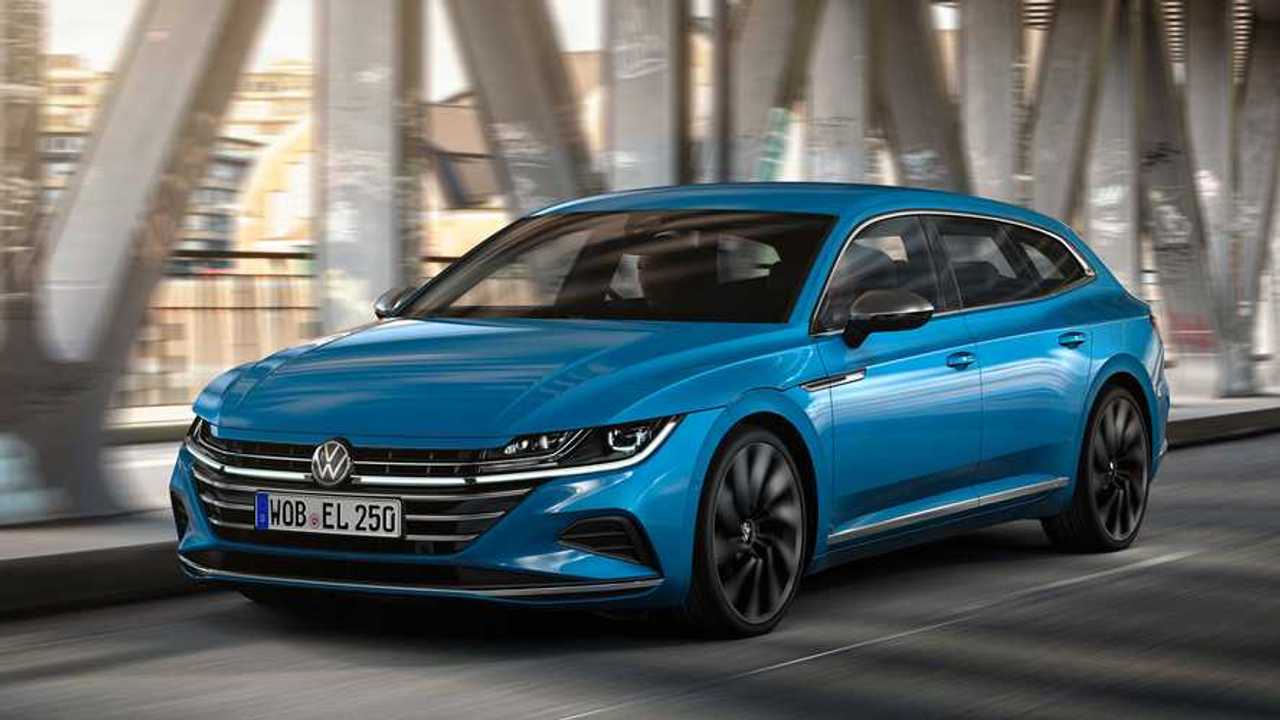 The Volkswagen Arteon has only been on sale in the United Kingdom since 2017, but it’s already getting an update for 2021. Featuring a very subtle exterior restyling, the 2021 VW Arteon will actually get a rather attractively facelifted interior, a move that the company says aligns it more with its flagship status.

In addition to the mid-cycle styling and technology changes, all-new variants broaden the range substantially starting with the achingly stylish Arteon Shooting Brake, an unusual long-roof variant of the hatchback saloon. What’s more, European customers will now have the option of a plug-in hybrid powertrain boasting 215 bhp (160 kilowatts) and a performance orientated Arteon R variant with 315 bhp (235 kW).

2021 VW Arteon Estate gets an early debut in China

UK trim levels have yet to be announced, however, the current model includes the SE, Elegance and R-Line trims so we expect that to remain at a minimum. A carryover 2.0-litre turbocharged inline-four should power each of our trims starting at 148 bhp (110 kW).

Looking at the German market models, Volkswagen went out of its way to distinguish the sportier R-Line from the base trim, giving the former a front bumper with enlarged lower grilles contained within a C-shaped frame. Unusual body-colour blades rise from the bottom of the front bumper to slash through the outer grille openings, giving the 2021 Arteon R-Line a slightly more sinister appearance. Also unique to the R-Line relative to other Arteons is a full-width LED strip that extends down from the headlights’ hockey stick–shaped DRLs onto the grille’s second accent bar.

An Arteon without R-Line styling (Elegance trim level) gets some front-end revisions as well. The grille has been reshaped with a wider shield motif, a move we think recalls the Ferrari Portofino ever so slightly. The restyled front bumper also features a full-width chrome strip above the front spoiler, giving the Elegance a more premium appearance.

Around the rear, changes are slight. The taillights have a more technical, futuristic appearance thanks to new LEDs, and the R-Line gets a distinct rear bumper design with integrated, quad-trapezoidal exhaust outlets. Finally, the saloon gets Volkswagen’s recently updated, minimalist corporate logo all over the vehicle, and the “ARTEON” script on the rear hatch has been revised as well.

In Europe Volkswagen’s proper flagship is the Touareg, and the company looked to that luxury SUV in redesigning the Arteon’s interior. Improved interior materials include embossed imitation leather for the dashboard and door panels, and a redesigned steering wheel with capacitive controls looks lovely.

The air conditioning unit is also new, ditching the old Arteon’s intuitive rotary dials with touch controls – we’ll admit we’re worried about that. European models get VW’s modern MIB3 infotainment that makes use of a touch-only interface, but American-market cars will pair the new system with ergonomically friendly volume and tuning knobs.

Even the base Arteon SE will be comprehensively equipped. A 10.3-inch Volkswagen Digital Cockpit gauge cluster comes standard, as does wireless Apple CarPlay and Android Auto, four-door keyless entry, and 8.0-inch MIB3 infotainment display. It also gets standard safety features like automated emergency braking and blind spot monitoring, as well as stylish 18-inch wheels with a new design.

The Volkswagen Arteon Shooting Brake is the latest automotive slap in the face for America, taunting Yankees with yet another wagon they can’t have. The five-door hatchback’s styling translates well to a long-roof design, thanks in part to strong rear haunches that stand out even more from the estate’s roofline than the hatch’s. The design of the side window openings pair with a slick roof spoiler to draw attention to the rear – “looking fast while standing still” applies here. Unfortunately, a new body style means a new round of US crash and emissions tests, something VW can ill afford given the wagon’s likely low take rate there.

Also on offer in Europe will be a plug-in hybrid variant of the Arteon hatchback. If it uses the same powertrain as the Passat GTE, then it pairs a 154 bhp (115-kW), turbocharged 1.4-litre inline-four with a 13-kilowatt battery powering a 114 bhp (85-kW) electric motor. Total system output on the Arteon plug-in, as on the Passat GTE, is 215 bhp (160 kW) and 295 lb-ft (400 Nm). The GTE can drive about 35 miles (56 kilometres) in EV mode before the engine fires up, more than enough for most Europeans’ daily commutes – we’d expect similar from the Arteon plug-in.

The other Volkswagen of which Americans will be deprived is the Arteon R. Volkswagen was mum on details except to say that the performance model will boast 315 bhp, as mentioned above. It’s possible that the Arteon R will be a plug-in hybrid, possibly pairing the Golf R’s 292 bhp (218-kW) 2.0-litre turbo four with a small-capacity, lightweight battery. 4Motion all-wheel drive is all but guaranteed on the Arteon R.

The Arteon’s primary calling card is its style. Going up against rivals like the Kia Stinger, the Arteon sells mainly on its ability to make onlookers gaze longingly as it passes by. With a subtle exterior restyling that spoils none of that appeal – and a modernised, luxurious interior that should impress the people inside the vehicle, too – the Arteon serves as a worthy flagship for the VW brand.