Never mind the 488-looking body, the final car will have a totally different design.

Following the 2013 LaFerrari and 2019 SF90 Stradale, Ferrari is gearing up to introduce its third hybrid model. This time around, the electrified Prancing Horse will be positioned towards the bottom of the lineup in terms of pricing and is expected to be smaller in size as well. Members of the FerrariChat forums are calling it the “Little Brother,” and now Motor1.com reader “Varryx” has spotted one right in the heart of Ferrari.

Although it may look like a 488 GTB with some weird camouflage and exhaust tips mounted higher, this is actually a test mule for a hybrid powertrain Ferrari has been working on for quite a while. The high-voltage yellow stickers are the dead giveaway, but there are other signs revealing the car is not what it appears to be.

It's been spotted before: 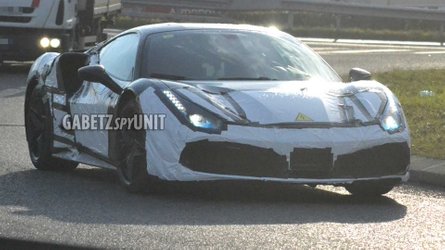 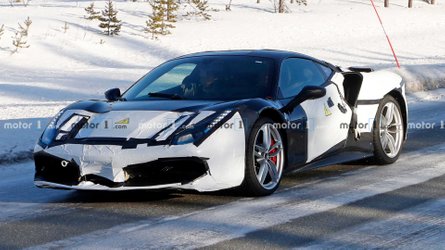 The side air intakes behind the doors are visibly larger than what we’re used to seeing on a regular 488 GTB. Not only that, but the blue wire sticking out from the passenger side reveals Ferrari was likely monitoring the engine’s parameters. The wire seems to be going in the engine bay at one end and inside the cabin at the other end, possibly being hooked up to a laptop.

The test mule was spotted sharing the road with the SF90 Stradale, which isn’t all that surprising given the electrifying nature of both supercars. It is believed the new addition to the Ferrari range will employ a twin-turbo V6 engine and an electric motor for an unknown combined output. It goes without saying it will be significantly less powerful than the SF90 Stradale and its 986 prancing horses. Some say the hybrid powertrain will produce roughly 700 bhp, but that remains to be seen.

Another piece of the puzzle we’re missing has to do with the car’s name, although the revival of Dino has been floating around the Internet for years. As to when the wraps will come off, the car will reportedly be unveiled in the first quarter of next year but it won’t enter production until Q3 2021. Meanwhile, the SF90 Stradale Spider and another vehicle will likely be unveiled later this year.