Watch this manned electric hoverbike fall from sky and crash 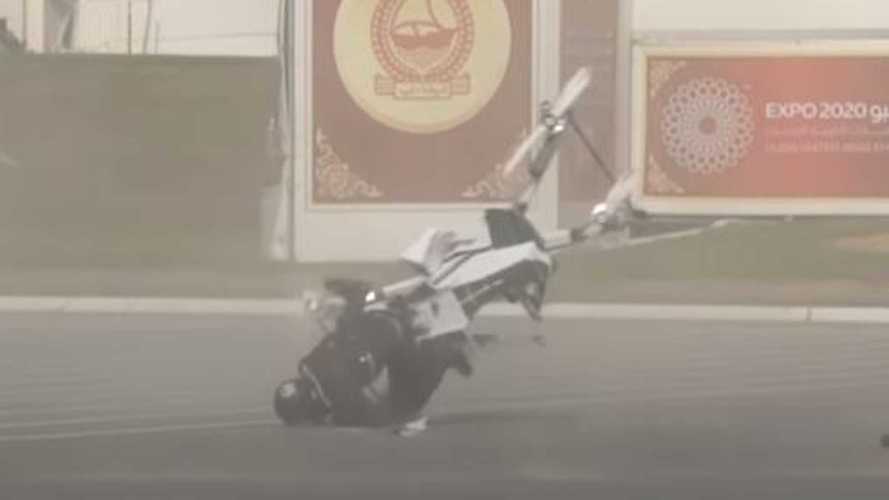 All safety systems worked as expected and no injuries were reported.

The hoverbike just can't stay in the air and, as you'll see in the video, it loses lift and slowly falls from a height of about 30 metres (100 feet) and hits the ground. We're not entirely sure why this flight failed, but the video description suggests it may have something to do with barometric pressure.

The Hoverbike featured in the video is part of the Dubai police force. It's unclear if the pilot was a member of the police or someone else testing out the unit.

Hoversurf Official (makers of the hoverbike seen in the video) explains the incident as follows:

The barometer in Dubai refused and an accident occurred - a down from a height of 30 meters. All safety systems worked well, and the pilot was not injured. Safety is our main concern. It is thanks to such incidents that our designs are becoming more safe.

It's good to hear that the safety systems worked as planned, though we sure would like to see an emergency stop in place for those spinning rotors which somehow, almost miraculously, didn't seriously injure the downed pilot.

Previously from the Hoverbike:

We're not so sure there's a real future for these hoverbikes, though they do look cool in action when working properly.

Now it's time for some background on these particular hoverbikes.

The Dubai police force unveiled a new hoverbike at the 2017 Gulf Information Technology Exposition (GITEX). Based on Hoversurf's Scorpion-3 hoverbike, the battery-powered DPF model has a top speed of 70 kilometres per hour (roughly 43 miles per hour), and can run for 25 minutes on a full charge.

This meagre performance isn't going to set any streets afire, nor will it help the DPF catch any of Dubai's notorious street racers, but that's not what it was designed to do. Dubai police say that the hoverbike will be deployed as a first-responder vehicle to get into hard-to-reach places where larger vehicles can't go. The DPF hoverbike can also be deployed as an unmanned drone with a range of about six kilometres. Not too shabby.

Below we've included the original video from the launch of the hoverbikes in Dubai: