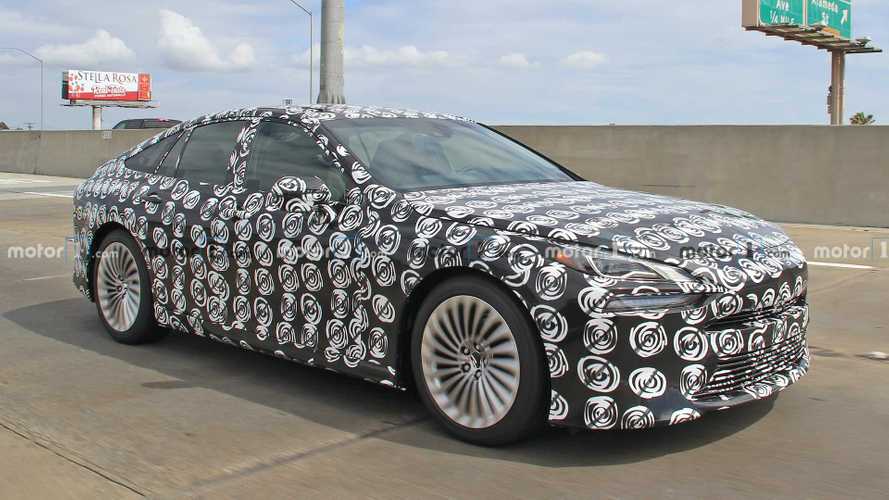 Here’s our first look at the saloon.

Last October, Toyota previewed a complete redesign for the Mirai, the brand’s hydrogen fuel-cell vehicle, with a design concept. It signalled a monumental shift in design for the model, transforming its alien-like appearance into something more like a traditional saloon.

At the time, Toyota detailed a few of the car’s specs and features, but today is the first time our spy photographers have spotted a test vehicle out and about, and it looks like the production version will be quite close to what we saw last year.

The 2021 Mirai, concealed in a black-and-white wrap, features a long bonnet and flat nose that look identical to that on the concept. The test vehicle features the shark-nose front end and grille along with the sloping roof ending in a truncated back end. And we’d be lying if we didn’t say it also looked similar to the Lexus LS fuel cell test vehicle our spy photographers spotted last July. The interior looks identical, too, including the gold trim on the dashboard.

Catch up on the latest Toyota news:

When Toyota revealed the Mirai last year, it also said it would target a 30-percent increase in range. The current Mirai, which makes 153 bhp (114 kilowatts), offers about 310 miles of range, and a 30-percent increase could see that jump to 400 miles. Inside, Toyota said the next-gen Mirai would offer a 12.3-inch touchscreen infotainment display and a 14-speaker JBL sound system, which are likely to see production if the spy photos are any indication.

Hydrogen fuel-cell vehicles are still niche, but that hasn’t stopped Toyota from continuing to invest in the technology alongside a handful of other automakers. The drastic design change comes from Toyota switching the platform, changing it from a front-wheel-drive platform to a rear-wheel one. This allowed designers to make it lower, longer, and wider than the outgoing model, completely changing how it looks.