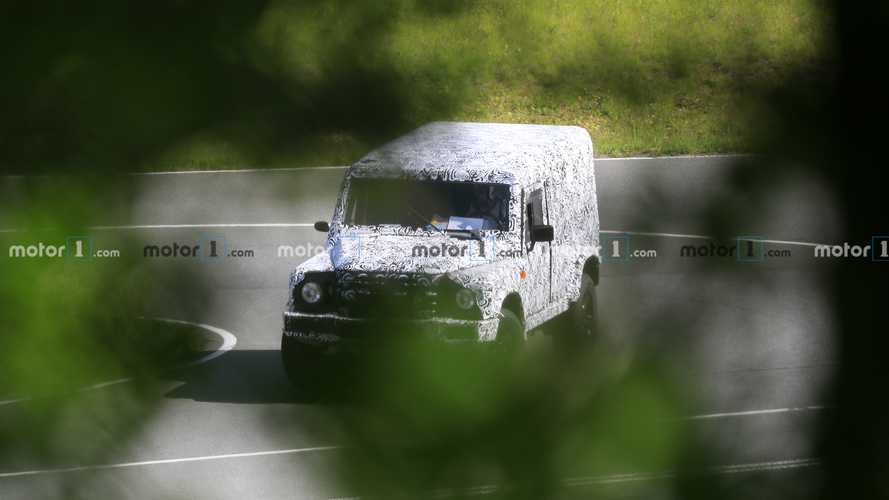 Magna-Steyr and BMW supplying components to this project.

If you miss the old Land Rover Defender and don't want to buy a used one, then a solution is on the way in the form of the Ineos Grenadier. These spy shots offer our first chance to see one on the road, and the styling is clearly taking lots of cues from the famous SUV.

The images show a boxy crossover that immediately evokes the styling of the old-school Defender. There is a circular headlight at each corner of the grille. Below it, there's a chunky bumper with what appears to be rectangular inlets. An angled skid plate protects the underbody.

The Grenadier prepares to fight in the SUV market:

Ineos confirms new Grenadier SUV to be built in Wales

This vehicle wears lots of camouflage and body cladding, but the piece covering the side indicates this model has four doors, even if the rear ones are currently hidden. The rear end is also completely concealed. The size of the rear hatch suggests that the hinges would be along the side because the panel is so big that opening upward could be awkward.

The Grenadier is a project by British billionaire Sir James Arthur Ratcliffe who is one of the richest people in the UK. Magna-Steyr is a partner on the SUV project and is handling the chassis and suspension development. In addition, the engines come from BMW, specifically a version of the brand's 3.0-litre inline-six. Ineos will build the Grenadier at a factory in Bridgend, Wales.

Before launching the Grenadier project, Ratcliffe actually attempted to buy the rights to the Defender from Land Rover so that he could keep building it. When the automaker declined the other, he decided to engineer a similar vehicle from scratch. Ratcliffe wants the Grenadier to be as capable off-road as a Defender but with improved reliability and better build quality.