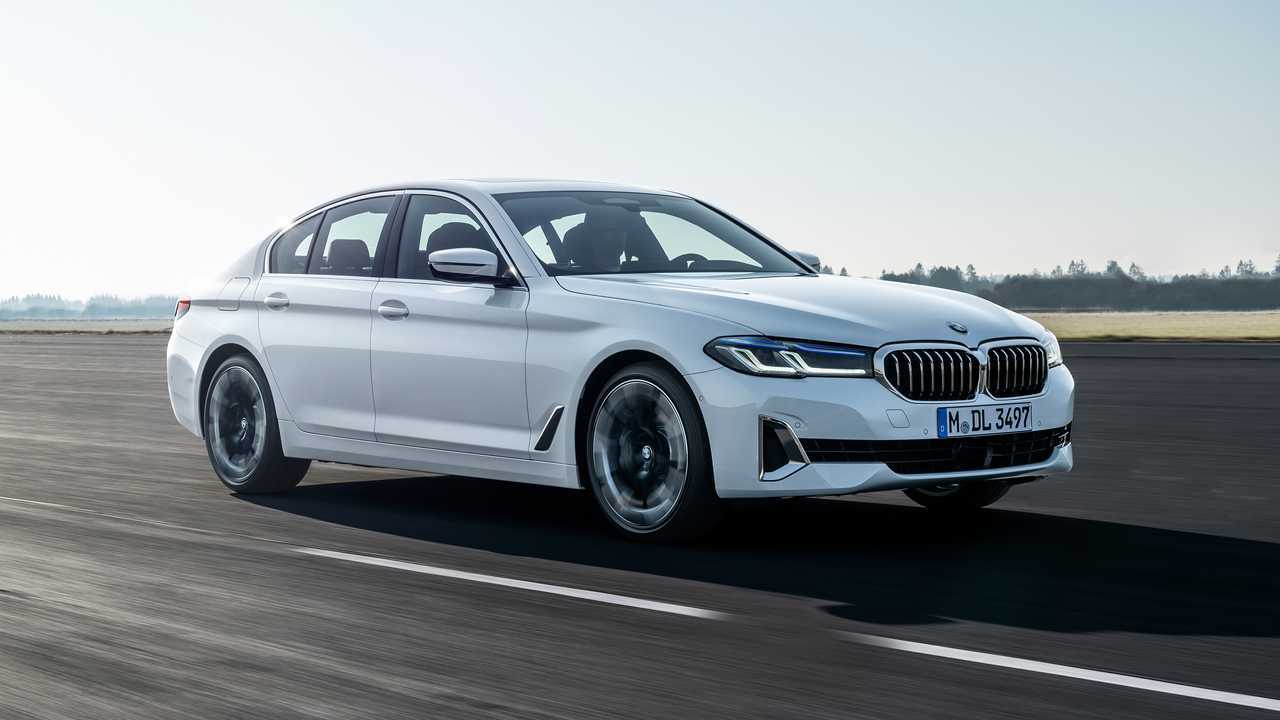 BMW’s facelifted 5 Series Saloon is now available to order in the UK with prices starting from just under £37,500. The updated Touring estate model is also being offered to customers, commanding a premium of £2,250, bringing its price tag up to almost £40,000.

Revealed earlier this week, the updated 5 Series has been given a new front-end design, as well as extra technology both in the cabin and under the bonnet. New high-performance and plug-in hybrid models are also making their way to the UK for the first time.

More on the new BMW 5 Series:

Despite those additions, however, the majority of the engine range will be familiar to many BMW owners. Kicking things off is the 520i petrol engine - a four-cylinder turbocharged unit that produces 181 bhp and uses mild-hybrid technology to minimise emissions and maximise economy. The system is standard across the range of 2- and 3-litre petrol and diesel engines, and harvests energy normally lost under braking and deceleration to help the engine out when moving off.

Above the 520i is the 188 bhp 520d. That 2-litre diesel engine is set to be more economical than the 520i, as well as more powerful, but it commands a premium of just over £1,000 compared with its petrol sibling. It does, however, give you the option of rear-wheel drive or BMW’s xDrive four-wheel-drive system.

Climbing the range further still, you come to the 3-litre, six-cylinder 530d, which comes with 282 bhp and four-wheel drive as standard. There’s also a 3-litre petrol engine called the 540i, which also comes with four-wheel drive but offers an even more impressive 329 bhp. It’s only available with the estate body shape, though.

Those engines sit alongside the two plug-in hybrid propulsion systems, which wear the 530e and 545e badges. The 530e powertrain is already available on the outgoing 5 Series, and combines a 2-litre petrol engine with an electric motor to provide a short all-electric range and the flexibility of an internal combustion engine. Rear- and four-wheel-drive versions are on offer, with the xDrive model costing £2,000 more than the standard rear-drive variant.

The 545e, meanwhile, will team the electric propulsion system with a 3-litre, six-cylinder petrol engine. Unlike the 530e, only rear-wheel-drive versions will be available when the car comes to market in November 2020.

Finally, the other new addition to the UK market is the V8-powered M550i xDrive. Unlike the other engines in the range, there’s no mild-hybrid assistance for the 4.4-litre V8, which produces 523 bhp and sends that power to all four wheels. In contrast to the 540i, it’s available solely with the four-door saloon body shape.

If the engine range is a little complex, the trim levels are much easier to comprehend. Essentially, there are three trim levels, with the £37,480 starting price buying the entry-level SE. That comes with 17-inch alloy wheels, Dakota leather upholstery and heated front seats, as well as an electronic boot or tailgate. As part of the 2020 upgrades, the SE also gets parking assistance and folding mirrors, while automatic air conditioning and BMW’s Live Cockpit Professional infotainment are also part of the package.

Moving up to the mid-range M Sport model adds an M aerodynamics package and glossy black exterior trim, as well as an M steering wheel and sports seats in the front. Eighteen-inch alloys are standard, while M Sport suspension is also included on all but the 530e and 530e xDrive models.

Climbing further still takes you to the M Sport Edition trim, which comes with either Tanzanite Blue or exclusive Donington Grey paintwork. It also benefits from red brake callipers, adaptive headlights and 20-inch alloys, as well as an M rear spoiler and M multifunction seats on the Saloon model.

All three trim levels are or will be available with every powertrain except the M550i. That car gets its own M Performance trim level, which gets exclusive 20-inch wheels, cerium grey exterior detailing and a Harman/Kardon Surround Sound System, plus an M Sport differential and adaptive M suspension.