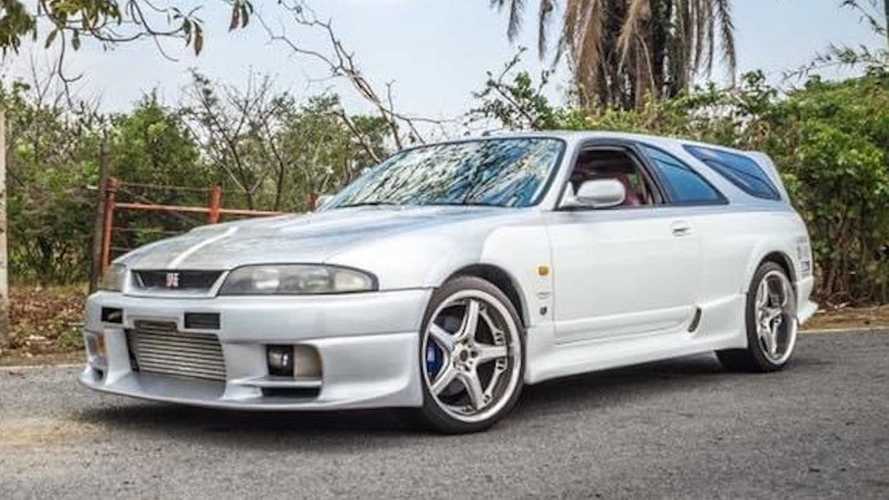 One of the many disadvantages of owning a Nissan GT-R, whether you’re looking at the current-generation model or the predecessors before it, is its practicality. The 2+2 sports coupe can only offer so much in terms of boot capacity – and don’t get us started with its rear legroom that’s better off for children and vertically-challenged adults.

That’s quite understandable, however, since that’s the trade-off for choosing to buy a Godzilla instead of an SUV or a family estate. But what if we tell you that there’s a one-off R33 Skyline GT-R out there in a long-roof form?

Aptly called the Speed Wagon, Vistec R Imports has this one-of-a-kind 1995 Skyline GT-R on its inventory for sale with a price tag of $85,000 (approx. £70,000). It’s made by Daijiro Inada and Option 2 Magazine. Unlike any Skyline GT-R we’ve seen before, and yes, we’re discounting the R34-faced Nissan Stagea that surfaced the webspace a few years back.

The extension of the roof, which sourced from Nissan EXA, doesn’t take away from the GT-R’s performance prowess as this specific example is said to have lapped the Japanese Tsukaba Circuit in just 1:04.452 – three seconds shy of the R35 Nissan GT-R Nismo’s lap time at the same race track. That’s thanks primarily to the 278 bhp ( kilowatts) and 277 pound-feet (375 Newton-metres that reside in its bonnet, catapulting the over-two-decade-old Godzilla to do a quarter-mile in 11.89 seconds. Top speed is rated at 189 miles per hour (305 kilometres per hour).

Inside, Skyline GT-R Speed Wagon’s extra boot space is complemented by a Nardi steering wheel, Kenwood amplifier and speakers, and four Recaro seats in the cabin.

As mentioned, Vistec R Imports is selling this unique vehicle for $85,000. If you’re to ask us, be quick in convincing your wife for this unicorn. We figure a number of husbands are already pleading their case for this.