Which electric cars lose less value in the UK?

Curiously, the depreciation rate changes as they age, possibly due to battery concerns.

Do electric cars depreciate more than combustion-engined vehicles? How much do they depreciate? Which are the ones that depreciate less? It was with these questions in mind that Vanarama, a British leasing company, decided to check ten popular EVs in the UK and measured their depreciation with the AutoTrader car valuation tool. And it discovered some surprising things it chose to share.

The most intriguing is that the depreciation rate is not very uniform. As expected, the steepest drop happens right after your car leaves the dealership. That moment is what defines it as a new car.

If you decided to sell your ride as soon as you took delivery of it, you would never be able to ask the same amount of money you paid to the dealer. To make your car attractive, you would have to charge way less. According to Vanarama’s research, the one you lose less money in the UK is the Audi e-tron, with a 12 percent depreciation.

The second best EV in terms of value retention is the Jaguar I-Pace, as you can see above. It has a depreciation of 14 percent after 5,000 miles. Unluckily for the British brand, Vanarama decided to recheck the numbers after 100,000 miles. 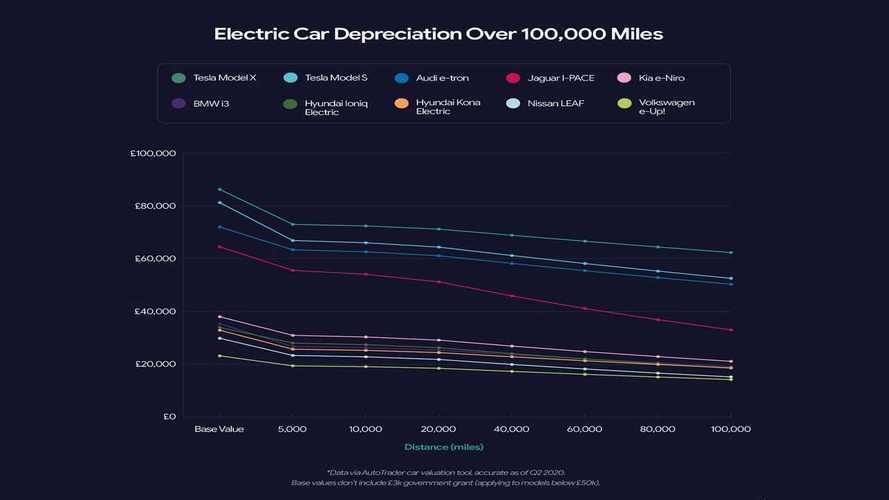 While the other EVs seemed to keep a pace, the I-Pace had a noticeable drop after 20,000 miles and kept losing value faster than the other EVs, which explains why it went from second place to ninth after 100,000 mi. It was the worst performance among all the electric cars evaluated.

If the depreciation rates were constant, there would not have been any other position changes. And many more happened, such as the Tesla Model X getting the lowest depreciation after 100,000 mi. The Audi e-tron did not fall that much after the same mileage: it got the second position, followed by the Model S. That shows Tesla vehicles have a broad audience among used car buyers as well.

The most stable vehicle in the research was the VW e-Up! It was the fourth after 5,000 miles, and it remained in that position after 100,000 miles. That shows that being the cheapest EV in the list did not make it less desirable.

The Nissan Leaf, with its air-cooled batteries, is almost stable, but in a wicked sense. It fell from eighth place to the tenth position in depreciation. It probably had a significant role in the AAA’s survey that pointed out to depreciation being one of the most prominent issues for EV owners.

Unfortunately, air-cooled batteries are more vulnerable to decay. The Renault ZOE – which was not included in Vanarama’s research –  also uses them, as well as the Mitsubishi i-MiEV and its “clones,” the Peugeot iOn and the Citroën C-Zero.

Unlike AAA’s findings, Vanarama did not find evidence that EVs depreciate more than combustion engine cars. It compared some of them – Audi e-tron, Jaguar I-Pace, Kia e-Niro, and VW e-Up! – to their equivalents, and only the I-Pace seemed to have a depreciating disadvantage compared to its combustion-engined brother, the F-Pace. If the evaluation went further than 100,000 miles, it is not unlikely that they will eventually cost the same thing after a £20,000 gap when they were new.

This allows us to conclude EV market behaviour will be very different depending on the markets in which they are sold. While depreciation is an issue in the US, it may not be such a concern in the UK. Regardless, manufacturers should still address battery replacement prices and better technologies to make them more attractive to a broader audience. A world without oil depends on that.