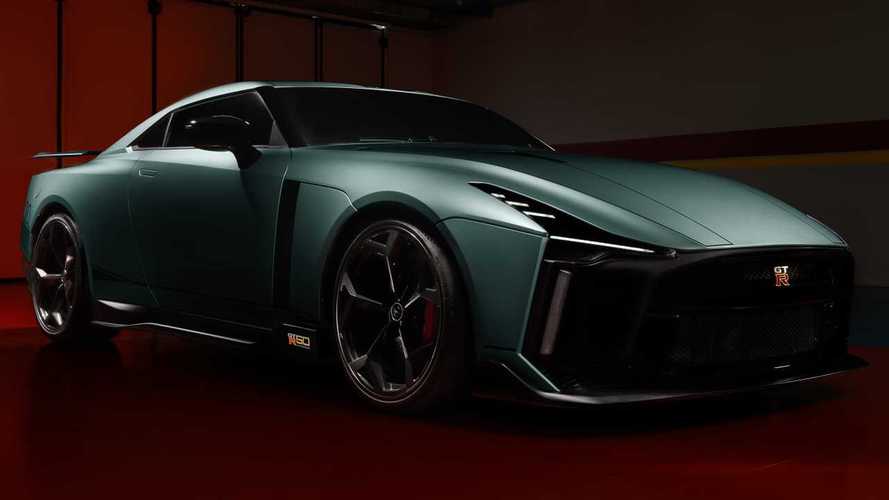 You’ve seen the prototype and official renderings of the production model, but now Nissan is finally releasing actual images of the GT-R50 by Italdesign. This is the car the two companies wanted to bring to Geneva, but they had to resort to plan B in light of the worldwide disruption caused by the coronavirus. Unlike previous images of the production version, the first customer car wears teal paintwork contrasted by black front and rear fascias.

While it’s not the next-generation GT-R we’re patiently waiting for, we are trying to see the glass half full as there’s at least some kind of news about Godzilla. Underneath the radical new skin is largely the same R35 that has been around since 2007, but now with a completely new look and some discreet updates inside the cabin. From the bumpers to the headlights, just about everything has been changed.

It’s certainly a sharp-looking supercar, with a roofline lowered by 54 millimetres (2.1 inches) compared to the 2018 GT-R Nismo upon which it’s based. The roof itself is different as it incorporates a lower centre section flanked by raised outer areas. The LED headlights lend the car a fresh look while the massive wing at the back can be adjusted. Rounding off the changes on the outside are the custom 21-inch alloy wheels exclusive to this model. Fun fact: the car was actually designed by Nissan by its teams in Europe and North America.

The interior hasn’t been subjected to the same level of changes as the exterior, but the cabin does make more generous use of carbon fibre, leather, and Alcantara. These fresh appointments are expected from a limited-run special edition, but they can’t really hide the GT-R’s age. After all, the R35 has been around for 13 years…

Beyond the revised appearance, the GT-R50 comes with mechanical upgrades since it uses an evolution of the twin-turbo 3.8-litre V6 engine. It has been massaged by Nismo to pump out 710 bhp or 110 bhp more than the GT-R Nismo or the Track Edition. Nissan says they’ve managed to bump the torque generated by the VR38DETT to 575 lb-ft (780 Newton-metres), representing an increase of 94 lb-ft (128 Nm).

The added punch required installing a reinforced sequential six-speed, dual-clutch transmission, while beefier Brembo brakes had to be added as well. Bilstein took care of the reworked suspension with continuously adjustable damping, and Michelin provided the Pilot Super Sport tyres measuring 255/35 R21 at the front and 285/30 R21 for the rear axle.

Even though Nissan has been accepting orders since December 2018 and only 50 cars are going to be built, there are still a few up for grabs. It might have something to with the rather exorbitant asking price of €990,000 (approx. £890,000) or roughly five times more than the most expensive GT-R, the £174,995 Nismo.

Those willing to pay that kind of money should know the first batch of customer cars will be delivered late 2020 and early 2021.

The waiting is finally over: just a few minutes ago, in streaming from the "Tazio Nuvolari" circuit in Cervesina, Italdesign launched the first Nissan GT-R 50 by Italdesign in the celebratory edition limited to fifty units.

The Nissan GT-R 50 by Italdesign is the result of the collaboration with the Japanese car manufacturer that began in 2018 with the creation of the prototype of the same name. The success achieved in the months following the presentation of the project drove Nissan and Italdesign to decide to launch production of the road version in a limited series of 50 units. The first vehicles will be delivered to customers in late 2020 and early 2021.

"This is a very special day - said Jörg Astalosch, Italdesign CEO - after extremely difficult weeks for everyone. After we had to renounce to the world premiere at the Geneva Motor Show and, after the partial stop of our production activities due to COVID-19, in early May we have returned 100% operative and can confirm the delivery of the first cars between the end of this year and early 2021, as planned. It is no coincidence that we presented the car from the "Tazio Nuvolari" circuit: it is where we routinely process all dynamic tests necessary for vehicles type approval for the different markets and we are about to conclude the ones for our GT-R 50 ".

Nissan collaborated with Italdesign to create the model, based on the latest Nissan GT-R NISMO, in commemoration of the 50th anniversaries of the GT-R in 2019 and Italdesign in 2018.

Powering each GT-R50 by Italdesign is a NISMO-tuned 720 PS hand-built 3.8-liter twin-turbocharged V6.

Customer demand for the production version of the car is strong, with a significant number of deposits already taken, and customers across the globe are in the process of selecting personal specifications for their vehicles, customers will be able to choose a livery inspired to the GT-Rs that made the history of the brand. That will make the already limited car — of which only 50 will be produced — even more attractive to collectors. A limited number of reservations for the remaining models are still available.

“Our customers have relished the personalized experience provided by Italdesign, who have a long tradition in the exclusive field of ultra-rare, bespoke high-performance vehicles,” said Michael Carcamo, Nissan's Program Director Sports Cars and NISMO. “Their experience with the GT-R50 has been incredible and I can say first-hand that each car will certainly be a standalone masterpiece.”

In Japan, customers can now purchase a GT-R50 by Italdesign through SCI Co. Ltd., a subsidiary of VT Holdings, which has been appointed official importer and distributor for these exclusive cars in the country.