Check out the BMW kidney grille's evolution over 87 years 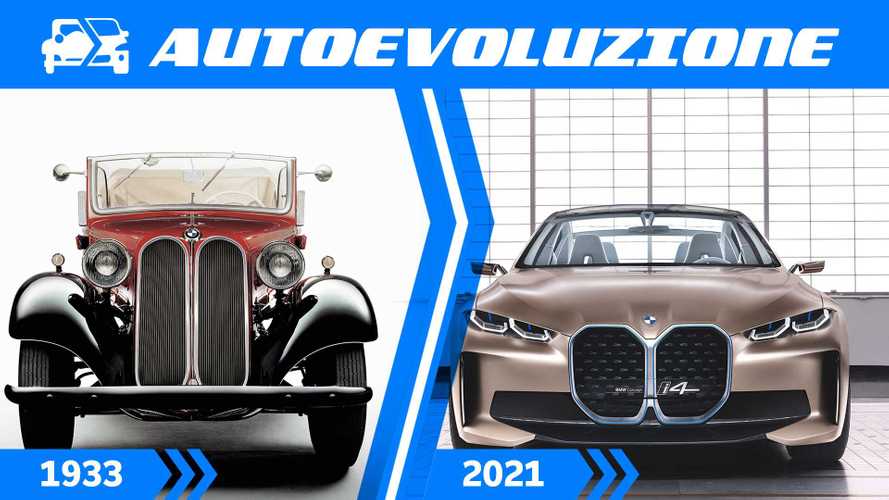 From the aerodynamic kidneys of 1933 to the tall grille of the upcoming 4 Series.

BMW's kidney grille is such a distinctive design element of the brand's models that it's hard to picture a product from the company without these dual openings at the front. It's now an iconic element for the firm's styling.

The famous design detail has changed many times since 1933, and it has only become bigger and bigger in recent years. Just look at the forthcoming BMW 4 Series for the best example.

But where does the BMW "double kidney" come from and how has it evolved over the years? Let's find out together!

An Angled Radiator for Aerodynamics

A brief historical note is necessary because when the BMW 303 was born in 1933, the double kidney was nothing more than a radiator grille divided into two long vertical parts that angled rearwards on the outside.

Designer Fritz Fielder used this split design as a way to improve the 303's aerodynamics. His decision kicked off a legend that has continued to appear on BMW's machine. Over time, the iconic grille has changed in height, width, shape, and position, but those who see it know at a glance that the car is a BMW.

The BMW 328 Makes Itself Known on the Circuit

The BMW 328 was among the cars that first made the BMW brand (and its grille) known in Europe because of its success in racing.

The style became more famous on the luxurious 327, and the look remained largely intact through the 1940s. In the postwar period, there were the 501 and 502 models that reproduced kidneys with a few changes. On the 503, things started to change when the shape shrunk in height.

In 1956, the 507 brought a complete revolution to the kidney grille. The spectacular sports car with a design by Albrecht von Goertz boasted a pair of short, yet wide horizontal opening that created an integral part of the styling between the headlights.

The BMW Z8 with a design by Henrik Fisker under the supervision of Chris Bangle brought the 507's styling back with a more modern appearance. The similarities are obvious, yet don't go so far to make the Z8 look too retro.

The Gradual Evolution of the Conjoined Kidney Grille

In recent years, BMW's designers have tweaked the design to incorporate a horizontal line joining the headlights to the grille. You can see this element on the latest 3 Series, 5 Series, and 8 Series. The i3 adapts this look into a smaller size because it does not need air to flow to the engine. With the i8 and latest Z4, the firm stretched the shape to occupy a larger horizontal area of the front end.

The 2011 BMW Vision ConnectedDrive and 2019 BMW Vision M NEXT concepts follow this same general style. However, the designers put a focus on creating more complex polygonal shapes along the edges.

Returning to the earlier evolution of the kidneys, check out look the arrival of the so-called Neue Klasse models in the early 1960s. On these vehicles, the designers used two relatively skinny ovals in the centre and incorporated a wide array of mesh outward to the headlights.

The first 5 Series from 1972, the 1975 3 Series, and the 1977 7 Series further crystallised this distinctive aspect of BMW's frontal design for the decades to come. The general concept of this styling cue lasted until the mid-1990s on some of the brand's machines.

Something a Little Different

Even while the company's major models wore the trademark combination of a wide grille opening and circular headlights, other products showed experimentation with something different. Vehicles like the M1, Z1, and original 8 Series still had kidneys, but they were smaller and simpler than other members of the lineup.

The 1989 Z1 and 1990 8 Series actually previewed the future direction for the kidneys that later models adopted. In the 1990s, vehicles like the E36-generation 3 Series, E39-gen 5 Series, and much of the rest lineup no longer head the wide grille from the past decades. Instead, the kidneys were a discreet element of the nose, and body-colour elements surrounded them.

Over the past ten years, BMW teased the motoring world by showing concepts and even some production cars with an slightly evolved take on the kidney grille.

With the 2018 BMW X5, the designers enlarged the openings horizontally and vertically. Using chrome for the uprights made them even more visually distinctive. So far, the 2019 7 Series and X7 are the most obvious expressions of this styling cue, but we know that more models like this are on the way.

Before that, however, there was the 2013 BMW Pininfarina Gran Lusso Coupe Concept and the 2014 BMW Vision Future Luxury were hints of what was to come.

Back to the 328 for a Vertical Grille

In 2011, the BMW 328 Hommage concept debuted showing a modern take on the classic model. Part of its design was a large, vertical grille that ran from the tip of the bonnet nearly to the ground. With the upcoming 4 Series, we are seeing the company incorporate this cue into a production vehicle.

The Writing on the Wall?

The 2014 BMW 3.0 CSL Hommage, followed by the 2016 Vision Next 100, 2019 Concept 4, and 2020 Concept i4 highlighted the slow evolution of BMW designers incorporating the taller kidney grille into increasingly production-ready-looking vehicles. We now know the Concept 4 is a very close preview of what to expect from the next-gen 4 Series when it arrives in showrooms.

Even earlier, there were signs of BMW eliminating the gap between the kidneys and using a single bar between them instead. Vehicles like the 2017 Vision Dynamics, 2017 Vision iNEXT and 2018 Concept iX3 showed this evolution.

BMWs Without A Kidney Grille

While they are uncommon, there are BMWs without a kidney grille. The Isetta comes to mind, although it's styling originally comes from an Italian microcar. There's also the BMW 700 that has a rear-engine layout, so the kidneys aren't a styling necessity.

Non-Bimmer BMWs with a Kidney Grille

Here's where things get weird because there are vehicles with close relationships to the Bavarian automaker without actually being BMW products that have a kidney grille. First, there's Eisenacher Motorenwerk (or EMW) from the former East Germany. Following World War II, the former BMW factory in Eisenach, Germany, began re-manufacturing pre-war BMW vehicles and later some tweaked versions of these products.

There's also the case of Britain's Bristol Cars in the post-war period. It was able to gain access to BMW technology and even employed BMW 303 designers Fritz Fielder to create the Bristol 400 that had a striking styling similarity to pre-war BMW vehicles.

There have also been a few cases of designers wanting to tweak the kidney grille. For example, the Spicup concept (green vehicle below) by Bertone in 1969 opted for an angular shape with rectangular shapes, which wasn't on production BMW vehicles at the time although was somewhat simpler to the later M1. Bertone also created the Garmisch (the beige vehicle below) with a diamond-shaped take on the kidneys.