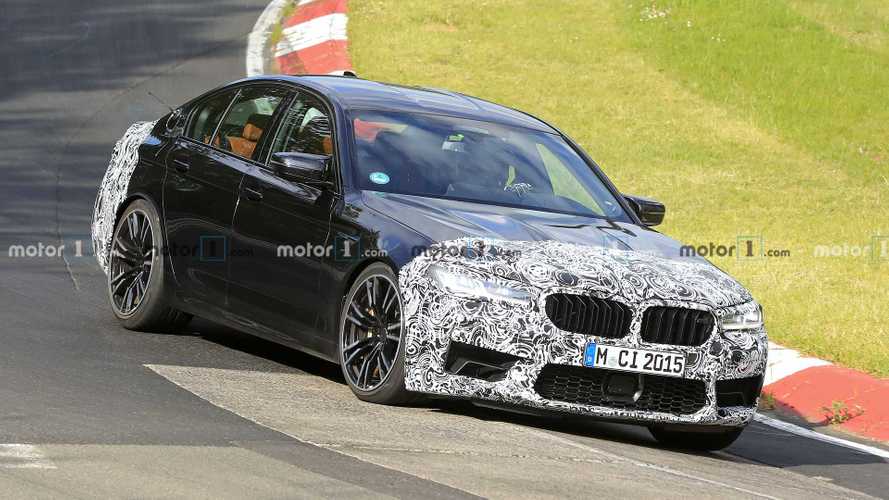 The grille also appears to be a tad different.

The Mercedes-AMG E63 isn’t the only luxury sports saloon from Germany about to get a facelift as BMW will be doing the same with its M5. Caught working out at the Nürburgring gym, the prototype had camo at the front and rear to conceal the swanky new headlights and taillights we’ve already seen. As you may recall, images of the 2021 5 Series LCI emerged late last month, showing the 530e plug-in hybrid model in the M Sport guise.

The PHEV version obviously had the swanky new headlights and taillights we’ll also see on the updated M5 once BMW is going to remove the swirly camouflage. We are noticing additional changes as the air intakes in the front bumper appear to have gained a piece of trim while the kidney grille’s slats are angled at the top.

We’re tempted to say this is not the hotter M5 CS because it’s lacking the beefier boot lid spoiler installed on other models carrying this suffix, including the M3 CS. We actually saw the actual M5 CS back in October 2019 with no camouflage whatsoever, revealing the aforementioned rear spoiler and a carbon fibre roof this prototype appears to be missing.

With images of the 5 Series facelift already circulating on the Internet, expect an official reveal to take place in the coming weeks. Chances are we’ll have to wait a bit for the M5 and perhaps even more for the M5 CS. The twin-turbo 4.4-litre V8 will be shared by the M variants, but the hotter one is rumoured to have as much as 641 bhp or an extra 24 ponies than the M5 Competition. BMW could also boost torque bit over the current 553 lb-ft (750 Nm), although not to the same extent as the horsepower increase.

A power hike should not come as a big surprise seeing as how it was only a few days ago when Markus Flasch, CEO of BMW M, revealed the company has not established a limit in regards to power. With electrification set to arrive in M models sooner or later, we can easily imagine an M5 in 2035 with close to four-digit brake horsepower.