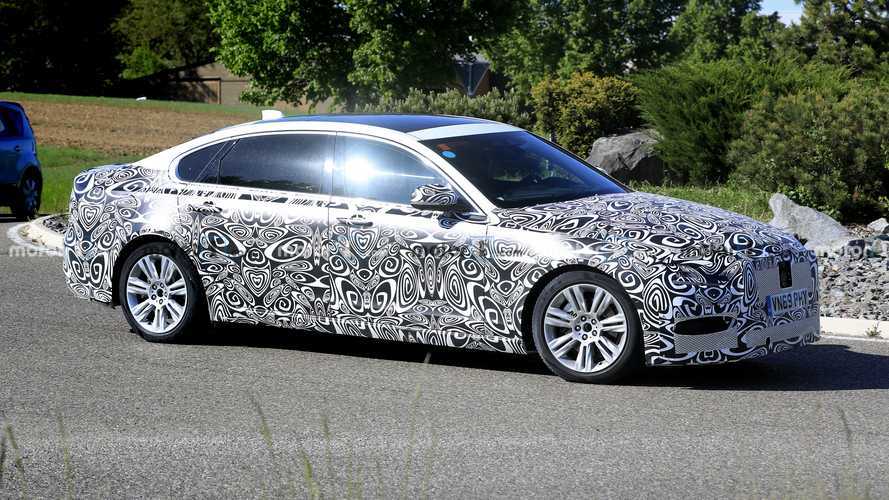 Sorry, it’s for China only.

Jaguar is preparing to launch several refreshed models, including a significantly updated version of its XF. Spy photos have shown the XF in both saloon and estate flavours, and today’s new spy photos show off the long-wheelbase version.

It wears the same black-and-white swirly camouflage as the other XF test vehicles, which covers the same parts, too. Many of the car’s design tweaks remain hidden, though there are a few things we already know about the elongated XF.

The 2021 Jaguar XF L will retain its current 3,300-millimetre (129.9-inch) wheelbase, which means rear passengers should continue to enjoy the extra 15 centimetres (5.9 inches) of legroom. However, while the wheelbase and legroom will remain the same, the comfort level should not. The XF L, like the standard XF, is expected to receive a substantial increase in perceived quality and luxury inside. Jaguar’s goal is to have the XF better compete with its German rivals like the Mercedes E-Class and Audi A6.

We haven’t seen the interior, though it should adopt what we’ve already seen with the updated Jaguar I-Pace and XE. That means the XF should have a secondary screen in the instrument panel for the climate controls. The 12.3-inch digital instrument cluster from the 2021 F-Type could be available, too. Expect an increase in material quality and fit-and-finish if Jag is truly aiming for the Germans.

Details about the XF and XF L’s engines remain elusive. All we know is that the new diesel engines will likely meet Europe’s more stringent emissions regulations planned for 2021. There’ll probably be several engine choices available, though the XF L is for the Chinese market only, so expect powertrains to meet that country’s various regulations.

Like any other mid-cycle refresh, the 2021 Jaguar XF L will receive new front and rear fascias, tweaked bumpers, new lighting designs, and other visual upgrades over the outgoing model. We expect Jaguar to reveal the updated XF sometime later this year before going on sale as a 2021 model.