VW Touareg GTE spied without an inch of camouflage 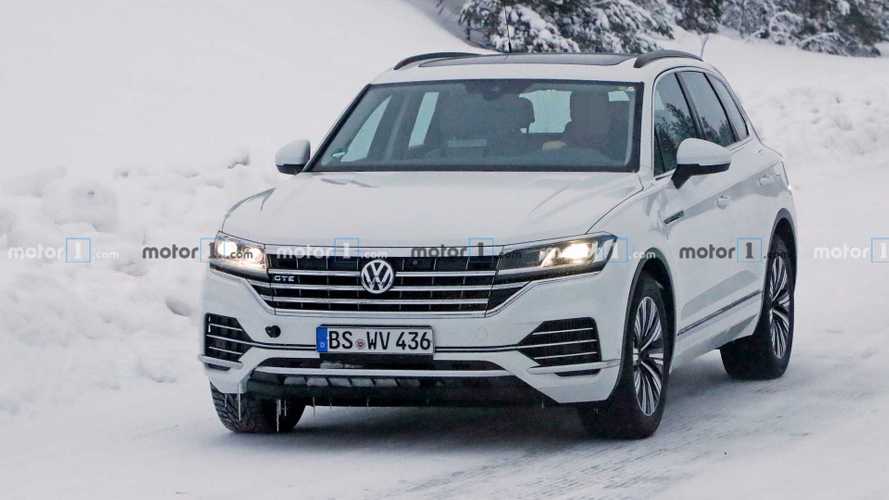 The PHEV will be positioned below the Touareg R.

In February this year, Volkswagen unveiled the Touareg R - the most powerful iteration of the latest generation of the German vehicle. With 456 bhp (340 kW) and 516 lb-ft (700 Nm) from a 3.0-litre plug-in hybrid powertrain, the super SUV has plenty of power on tap and can even go at speeds of up to 87 mph (140 km/h) on purely electric power. Now, it seems that Volkswagen is also preparing a more civilised version of this vehicle.

These photos show a completely undisguised prototype of the Touareg GTE. As its name implies, it will be an electrified version of the large SUV from Wolfsburg, which will slot below the Touareg R. In fact, we already have a pretty good idea of what will likely be under the bonnet.

When the new Touareg was released in April 2018, the automaker announced a PHEV version for the Chinese market. It uses a plug-in system with a 2.0-litre petrol engine and an 18-kWh battery pack for a combined output of 362 bhp (270 kW) - and our green colleagues from InsideEVs believe the European version will have the same peak output.

In the People’s Republic, the Touareg GTE has a maximum all-electric range of 36 miles (58 kilometres) but bear in mind that this is measured by the overly optimistic NEDC test cycle. Calculated according to Europe’s new WLPT guidelines, the range will be between a quarter and a third lower.

As these spy photos reveal, the Touareg GTE won’t be drastically different from the rest of the trims in the SUV’s lineup. Instead, VW will give it just small visual touches, including specific badging and probably a slightly modified front fascia, to better differentiate it from the diesel, petrol, and R versions. Look for a debut of the PHEV high-riding family hauler before the year’s end.