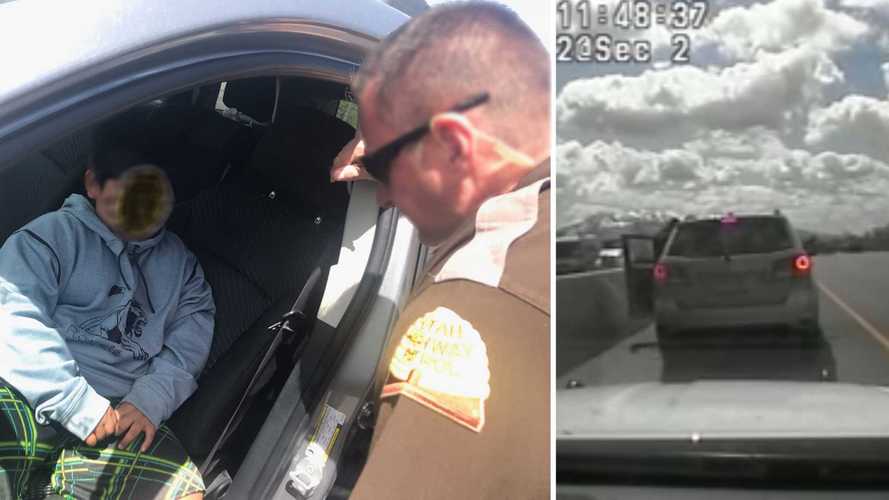 His mum wouldn't buy one, so he decided to do it himself.

If the parents of this decidedly headstrong five-year-old young boy happen upon this article, we want you to see the silver lining in this incident. Not only did the youngster manage to successfully operate this SUV, he drove it on the motorway without hitting anyone. More importantly, he promptly pulled over and stopped when Utah State Trooper Rick Morgan turned on his cruiser's lights and siren.

Frankly, there are many full-grown men – usually not wearing shirts (apparent a U.S. thing) – that lack such wisdom and common sense when facing an encounter with the law. So kudos to this kid for making a smart decision.

Of course, it all began with a not-so-smart decision, as outlined in a Twitter post from the Utah Highway Patrol.

On 4th of May, this determined boy set out on a trip to California after allegedly having an argument with his mum. For reasons we cannot possibly understand, the youngster was compelled to climb inside is mum’s SUV and head west. His motivation? Mother refused to buy him a Lamborghini, so he was going to go and buy one his own damn self. And he apparently had $3 burning a hole in his pocket for the purchase.

Actually, we do understand – who doesn’t want a Lamborghini? And if we’re completely honest, we’re a bit jealous of this kid’s determination to make it happen. We've all been there, ready to pull the trigger on a dream car only to have someone else say no. That said, we don't condone anyone not of legal driving age making a supercar pilgrimage to California, or any pilgrimage where they take the wheel. If you have a license to drive and sheer determination, however, go make your dreams come true.

More innocence behind the wheel:

And yes, that apparently is the actual story here. According to CNN, Trooper Morgan pulled the car over expecting to find a drunk driver behind the wheel. Instead, he found a five-year-old that could barely reach the pedals, never mind see what was going on outside. As for the parents, the report says they were out of the house when the joyride occurred, leaving the youngster in the care of a sibling. And since we’re dealing with at least one very young person, everyone relating to this family is comfortably anonymous.

What happens now? The report says any possible punishment to the parents will be left to the local prosecutor. As for the steely-eyed future Lamborghini owner, we suspect punishment from mum and dad has already been served. We've taken a humorous tone here, but we’re very happy nobody was hurt because this could’ve been a disaster.

Hopefully this becomes an isolated incident that, at some point in the future, everyone can laugh about. In the meantime, here's a message for mum and dad. When this young driver-in-waiting is finally not grounded (presumably before he's old enough to drive legally), get him a Hot Wheels Lambo as a consolation gift. After all, he did promptly stop for the bobbies. That's gotta be worth a little something.