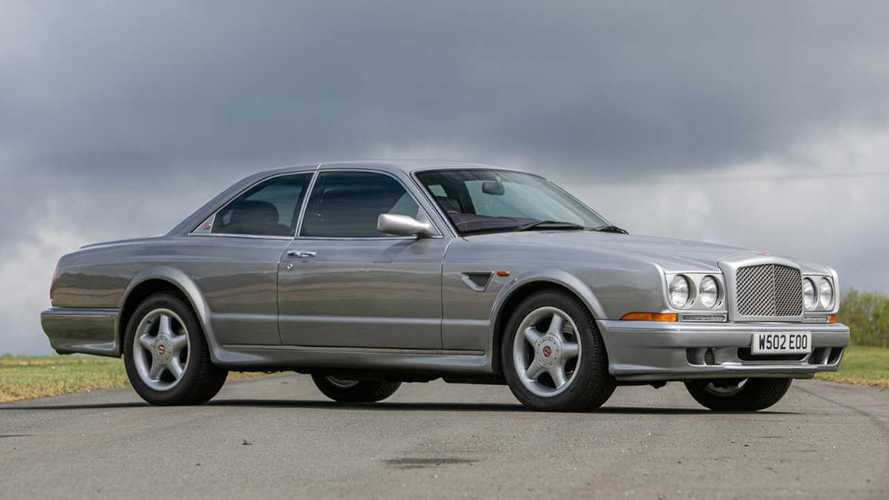 An opportunity to grab one of just 46 Bentley Continental R Mulliner Widebodys.

A rare Bentley, one of just 46 in existence, headlines Silverstone Auctions' upcoming live online sale on the 23rd May.

The Bentley Continental R Mulliner Widebody came about after customers asked about putting more powerful, turbocharged engines into the Widebody Continental R. In 1999, that was realised, with the car being unveiled at that year's Geneva motor show. Each car was custom made to its owner's exact specifications, something that's the norm for all manner of exotic cars nowadays but wasn't back then.

The car that Silverstone Auctions is offering is finished in special order Silver with a Mulberry interior. It has a host of special extras including an engine-turned aluminium dashboard. The clock has 33,000 miles on it, while the service book comes with stamps from Bentley and Frank Dale. Pre-auction estimates put the price at £72,000 to £82,000.

Among the other cars in the auction lineup is a 1999 Rolls-Royce Silver Seraph, the first car that the British company made under BMW ownership. Powered by a 5.4 litre V12 engine from the German firm, it's capable of a top speed of 140 mph.

This three-owner car is finished in Amethyst with a Cotswold hide interior with Indigo piping and plenty of Burr Elm and is expected to fetch £32,000 to £36,000.

Elsewhere in the auction is a Lotus Europa that has undergone an extensive body off and new chassis restoration which was carried out over a 12-year period, and was repainted in Roman Purple with a cream leather interior. Over £30,000 was spent on the restoration, making the pre-auction estimate of £22,000 to £26,000 a bargain.

"These are a few of the fantastic cars we will be offering at our May live online sale," said Harry Whale, Silverstone Auctions manager. "Superb examples of British classics which are now fast becoming popular additions to any enthusiast’s collection.

"We already have an impressive catalogue of cars but are still accepting entries up to the 13th May, so please do contact our specialist team if we can be of help."

With Britain still under lockdown, once purchased the cars will be kept in a single secure storage facility where they may be viewed by appointment only and in line with Government guidelines.