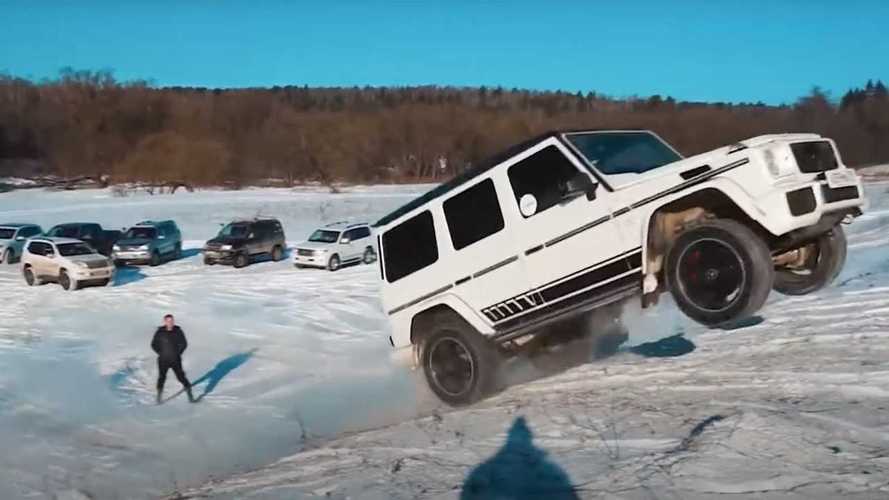 Most Mercedes-Benz G-wagon SUVs have sadly never been off-road. These capable SUVs offer some of the most impressive off-road performance money can buy, yet most of them spent their lives on the road heading towards malls and restaurants. Today we see a refreshing video with not one but two Mercedes-AMG G63s having a great day off-roading.

The Mercedes-AMG G63 is one of the most impressive SUVs ever built. The models featured in the video come from the previous generation G-Wagon before the model received a major refresh for the 2018 model year. This chunky off-roader started out life as a military vehicle which slowly transitioned to road use, eventually becoming a status symbol enjoyed by the globe’s wealthiest reality TV stars.

Today we finally get to see what a G63 is like off-road in the hands of some fun-loving enthusiasts who drag race up a snowy hill routinely catching some impressive air in the process. The G63 introduces the humble G-Wagon to the madmen at Mercedes-AMG who turn the G-Wagon into an off-road missile.

A twin-turbo 5.5-litre V8 used from 2012 to 2018 is good for 563 bhp, while 6-piston front Brembo brakes were added to control this additional horsepower. The addition of three locking differentials including a front, rear, and centre locker allows for impressive off-road traction and performance as the G63 has great control over its power delivery. All of these impressive features make the G63 a seriously capable machine on and off-road.

Although most G-Wagon owners have probably never used their locking differentials or other off-road features, I’m happy to know you have them. Much like a supercar, it's hard to approach the potential of today’s top tier vehicles that can do this far beyond the ability of a normal driver.