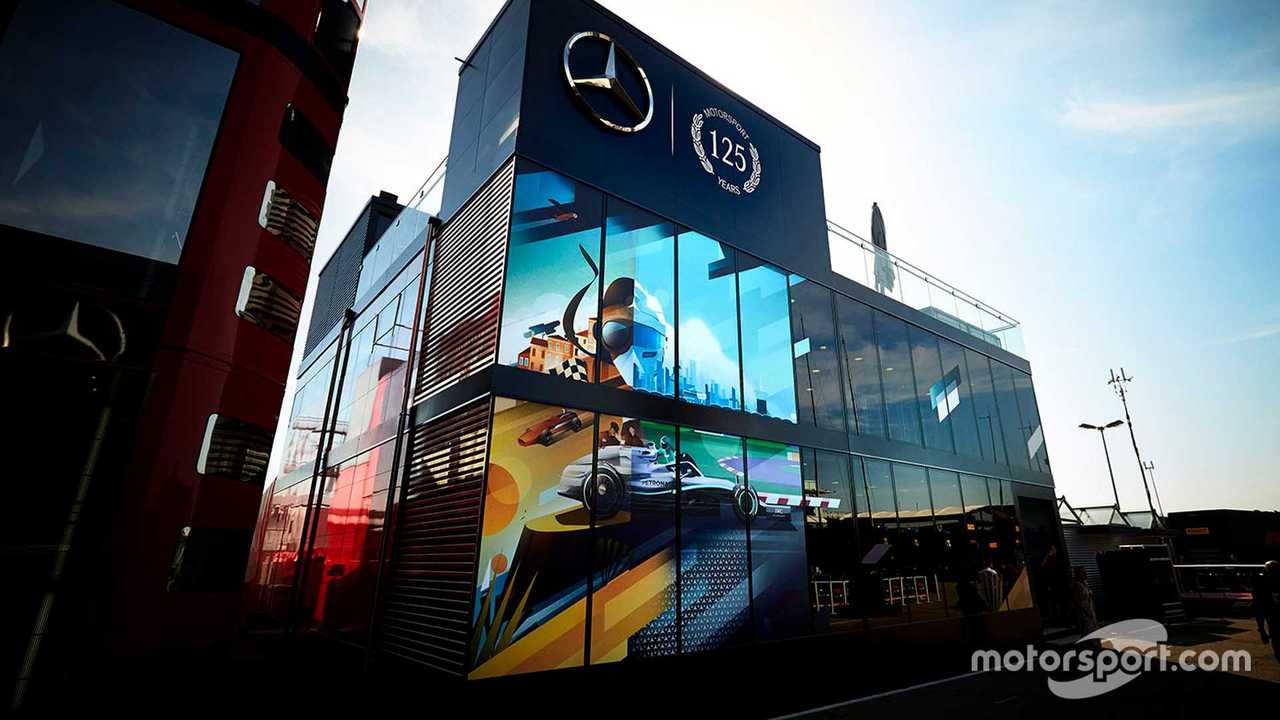 With Formula 1 looking set for a massive cost cutting exercise when racing gets going again, there is a chance that the paddocks will never be the same again.

A likely slashing of sponsorship involvement, a pull back of corporate entertainment and the need for teams to tighten their belts means the days of thousands of people milling around behind the pits may not return for a while.

One element that could also change for good is the motorhomes; with perhaps some of the opulent 'gin palaces', as they were referred to by F1 boss Ross Brawn earlier this year, not longer deemed appropriate for an age of potential austerity.

Indeed, even before coronavirus took over the world, there was talk of F1 looking towards an alternative to the modern motorhomes that have become so iconic for European races.

Amid F1's push for a more sustainable future, Brawn suggested that it no longer made environmental sense for teams to be building, packing up and then driving motorhomes many thousands of kilometres around the continent on polluting articulated lorries.

Instead, it was felt that having prefabricated units – as are commonplace at flyaways – at F1 tracks would be better for the environment and just as good for teams.

"We go to overseas races, for example we go to Baku, and you have a nice set of prefabs all laid out for you. Nobody complains, and it is all workable," he said.

"Then we go to Monza and we have our gin palaces with all the trucks that are needed to transport them. So in the future, we want to move to a motorhome or hospitality facility which could be put up with far less impact in terms of logistics and transportation than we have now."

Brawn's comments did not gain universal support though with Red Bull's Christian Horner, whose famous 'Energy Station' redefined the motorhome generation, particularly outspoken about the matter earlier this year.

Asked by Motorsport.com what he thought of Brawn's suggestion that motorhomes could be phased out, Horner said: "Well, Ross needs to have a look in his own Concorde Agreement because it doesn't make any reference to that in their draft. So I'm not quite sure what he was referring to.

"But yeah, this [Red Bull motorhome] is very sustainable, it's all out of wood - and I think for the European races, teams' hospitality is their base, their home for those European races. It makes sense.

"Obviously for the flyaway races we all survive, but I think what's vital is that moving forward - we get charged the fortune for a tent and chairs and whatever else, that those costs, they're provided for by the promoter. So when you turn up, you get a set amount of facilities that we don't end up buying tents at every grand prix where we go around the world."

The world has changed since the issue came up and, amid the likelihood of social distancing staying in place for many months to come, the need for extra space in the paddock for individual teams will certainly be no bad thing.

And, if the season does get going with back-to-back races at individual tracks – meaning teams are staying put for up to a fortnight at a time, it makes most sense for teams to have their individual bases.

It would only be if F1 unleashed a run of three of four consecutive races, all dotted over Europe, that teams could be forced to compromise on their facilities: as happened when it did a France/Austria/Britain triple header.

But what happens when the coronavirus pandemic has passed and F1 can return to a new normality – when the concerns are more about costs than face masks and keeping two metres apart?

Some teams think there is merit in Brawn's suggestion of bespoke facilities rather than teams bringing their own each time.

McLaren CEO Zak Brown said earlier this year it was sensible to rethink the approach to motorhomes.

"The reality is we work out of temporary facilities more often than not, and we adapt quite well," he said. "The Singapores, and Mexicos, Abu Dhabis, Bahrains all have very nice facilities.

"So I think it's something that we will probably be supportive of. We want to understand what will be provided by the circuit, because some of the circuits do a better job than others, and what they provide us, we need to make sure we have enough space for our sponsor partners, for our engineers, for our team.

"And then I do think it is a differentiator of the racing team. So I'd like us to have an ability that when we're moving into a temporary facility that we have the ability to customise it enough so we can still differentiate the McLaren brand from other brands."

But don't think for a second that a more cost-efficient F1 means the end of spending on motorhomes. First of all, they provide a useful function to teams and in the grand scheme of things, the spending to feed its own members – and entertain sponsors and guests – is minimal compared to the cost of competing.

Even for FIA president Jean Todt, who has the bit between his teeth in saving teams for themselves by trying to bring down costs, sees motorhome opulence very low down the list of priorities.

"Honestly, I am not so bothered about motorhomes or something like that, because it is visible but it certainly is not a deal-breaker in Formula 1," he told Motorsport.com earlier this month. "There are other things that are much more important."

The message seems clear. Motorhomes are unlikely to get bigger and badder in the near term as marketing budgets come under pressure in the post coronavirus world, but they aren't about to disappear completely.