Is this really the new BMW 2 Series Coupe without camouflage? 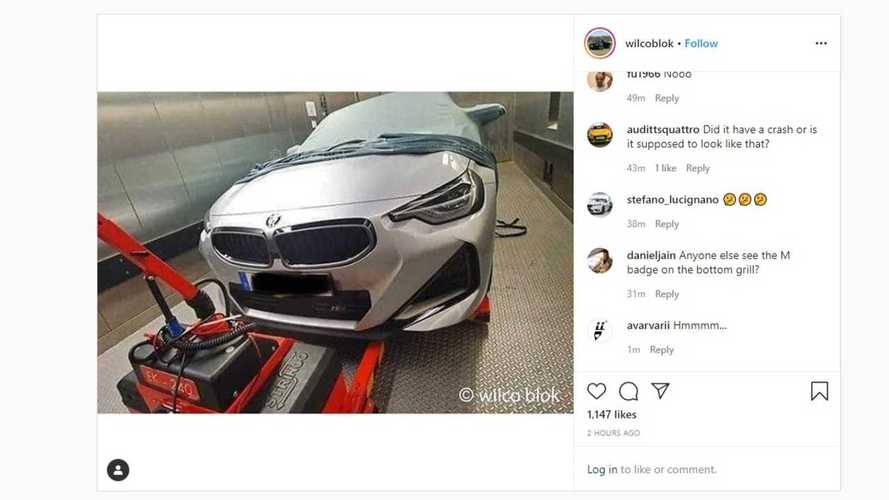 It appears to be a hot M Performance version with a surprisingly small-ish grille.

Our lazy day is suddenly more interesting as a couple of intriguing spy shots have emerged on Instagram courtesy of wilcoblok. It’s unclear at this moment where the images come from, but they appear to be showing the next-generation BMW 2 Series Coupe free of camouflage, albeit the car cover hides most of the bodywork. We do get to see large chunks of the front and rear designs without any disguise whatsoever, revealing some noteworthy details.

First of all, we are pleasantly surprised by the relatively small size of the kidney grille. We were afraid it would get the XXL treatment as seen on the car’s bigger brother, the 4 Series Coupe, due to be unveiled later this year. We’re hoping this is a sign that not all of BMW’s cars will adopt the inflated grille, but that remains to be seen.

The headlights represent a significant departure from current designs and few would probably be able to tell these actually belong to a BMW. We could say the same thing about the front bumper as it looks rather unusual, especially with those triangular vents and what appears to be an M logo on the lower radiator grille.

Speaking of M, it seems we’re dealing with an M Performance version judging by the generously sized dual exhaust tips and that spoiler on the boot lid where there seems to be the M logo and the model’s designation. It’s not a full-fat M model, so we’re tempted to say this prototype belongs to the next M240i Coupe.

What we said about the headlights holds true for the taillights as the rear lighting clusters are also rather atypical compared to recent BMWs, although some would say they're sending an E90 3 Series vibe. The vehicle appears to have German license plates so it’s an actual car rather than a clay model, which would suggest this is the final design rather than one of the many proposals that are typically left on the cutting room floor during a car’s development.

We shouldn’t exclude the possibility of this being an elaborate Photoshop considering we haven’t seen any spy shots of the next 2 Series Coupe whatsoever. Then again, there’s a good chance this is indeed an early look at what BMW enthusiasts are referring to as the G42. It’s slated to come out sometime in 2021 with a rear-wheel-drive layout as opposed to the FWD-based Gran Coupe and the next Active Tourer MPV we’ve spotted repeatedly. The 2 Series Convertible might not live to see a new generation since it would clash with the Z4, but it's only a rumour at this point.