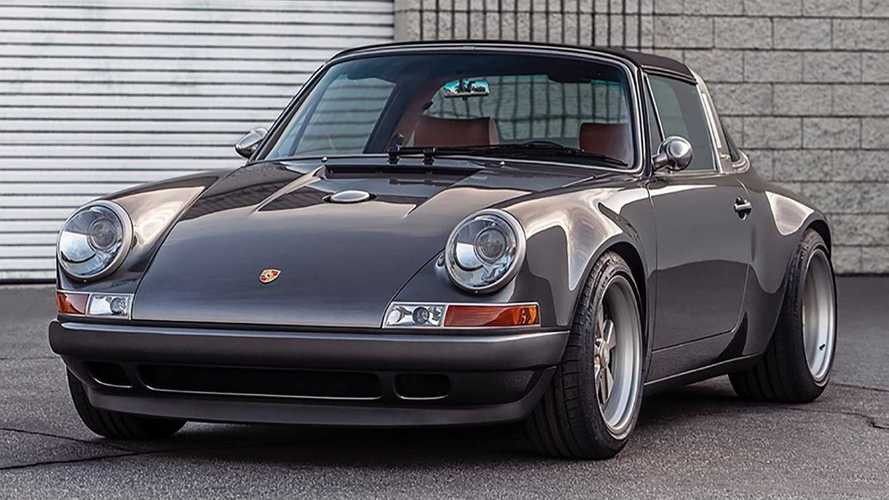 The gunmetal exterior serves as the perfect contrast.

Restoring an old car can take several routes. You can restore a car to its like-new condition with an extensive restoration that requires sourcing OEM parts and removing every screw, bolt, and clip. You could take a casual approach, fixing things as needed, and maybe even installing a new radio with Bluetooth capability.

Or you could do both, taking a detailed-oriented approach to restoring a car while modernising it, which is what’s made Singer Vehicle Design so popular with the air-cooled Porsche 911 models.

The latest from the company is the Honour Roll commission, a 4.0-litre model finished in dark gunmetal, a black Targa top, and nickel bumperettes and badging. Singer shared the build on its Facebook page over the last few days, giving fans an up-close look at the restored, air-cooled Porsche. It features a centre-mounted external fuel filter and a black ceramic exhaust system, as the customer wanted.

Three Singer 911s set for Goodwood, including one new model
⠀

Inside, a deep orange contrasts with the dark exterior, again following the owner’s specifics. The leather adorns the seats, flooring, door panels, dashboard, and more. The lightweight seats are made with carbon fibre and covered in perforated leather. The dashboard is finished in nickel with the cabin featuring alabaster stitching. Singer even colour-matched the rear compartment panels, transmission tunnel, and door sills with the exterior.  The fine details also extended to the front luggage compartment, where there’s more quilted orange leather and alabaster contrast stitching.

Singer’s pursuit of quality has made the company quite famous. Started in 2008, the company quickly made a name for itself modernising air-cooled Porsches without sacrificing what makes the old cars so unique. In 2018, ten years after opening, the company completed its 100th restoration. At the time, Singer had deposits to restore another 130 cars, giving the company plenty of work for the future. Scrolling through Singer’s expansive gallery of builds shows how tasteful the company can combine iconic aesthetics with modern technologies.