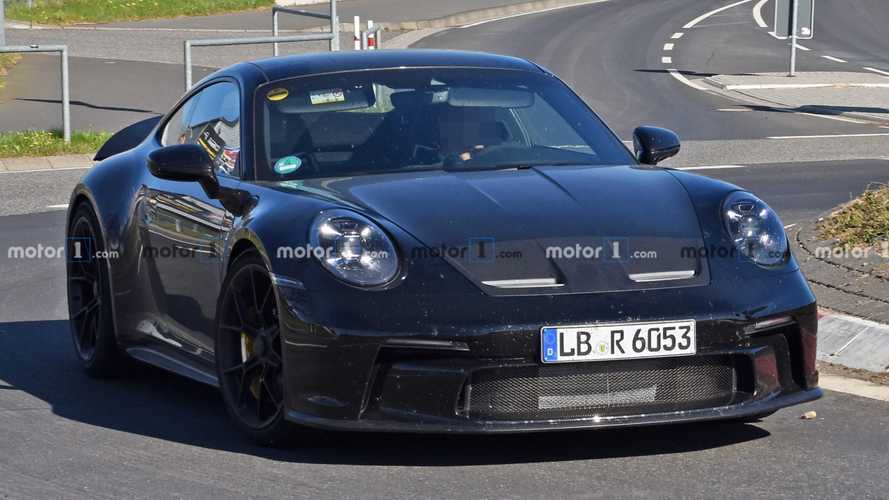 Is Porsche going to offer a six-speed manual?

Porsche’s idea to offer its 911 (generation 991) customers the Touring Package for the 911 GT3 as a no-cost option turned out to be a great move. Many people opted for the wingless model and it became an instant hit. So much so that prices of second-hand 911 GT3 Tourings are usually higher than those of the regular 911 GT3s.

The Stuttgart-based company is well-aware of that fact and it comes as no surprise that it’s cooking up a new generation 911 GT3 Touring. We’ve seen both the new 911 GT3 and 911 GT3 Touring testing on public roads, and today we bring you the latest batch of photos, depicting the latter with almost no disguise.

This black pre-production prototype was caught by our spies around the famous Nurburgring track in Germany. The trial car has no concealment at the front, which reveals what is likely the final design of the bumper with modified air inlets. The shape and contour of the vented bonnet are also finally visible and these appear to be identical to the regular 911 GT3.

The rear end is where the most significant changes between the Touring and regular GT3 model will be focused. Instead of a massive fixed wing, this variant has a smooth electric active spoiler as seen in the basic Carrera. A pair of exhausts emerge from the bumper, and there's a diffuser below them but Porsche is still hiding portions of the bumper with fake panels.

According to preliminary information, the new 911 GT3 family will use a modified version of the company’s 4.0-litre naturally aspirated flat-six engine with output numbers expected to be around 550 bhp (410 kilowatts). At this point, unfortunately, it’s not clear whether the new Touring models will get a six-speed manual as a no-cost option or will be sold as DCT-only offerings.