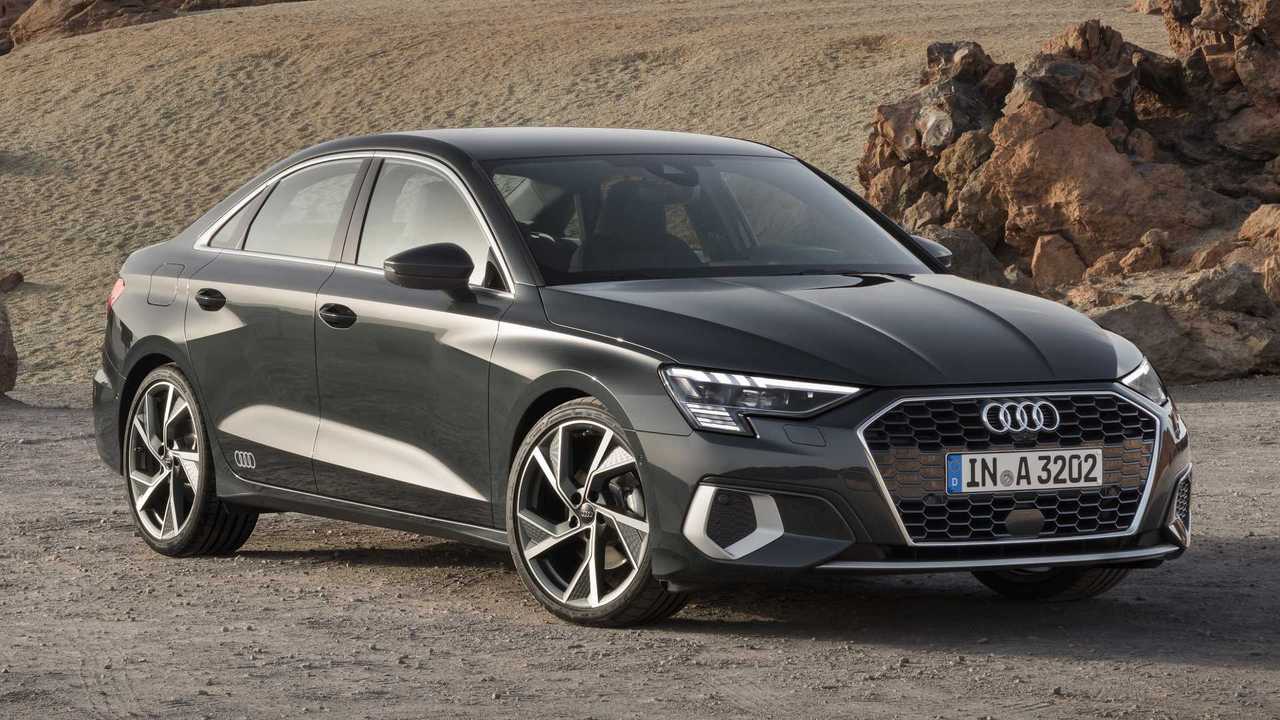 Newcomer gets much the same updates as the recently revealed A3 hatchback.

The updated Audi A3 Saloon will go on sale in the UK on Thursday, with prices starting at just under £27,000. The arrival of the new four-door model follows the unveiling of the updated five-door A3 Sportback hatch earlier this year, and the two cars have much in common.

Not only does the new saloon adopt its sibling’s new front end, but it gets the same mild-hybrid powertrains and some of the same upgrades over its predecessor. However, although Audi will start taking orders this week, the first cars aren’t expected to arrive in the UK until the summer.

More on the new Audi A3:

New Audi A3 Saloon rendered based on latest spy shots

When they do arrive, the new models will be slightly longer than their predecessors, as well as slightly wider and a mite taller. All this means there is a slight increase in front headroom, as well as marginally more elbow room, but the 425-litre boot remains.

Customers in the UK will get a choice of four trim levels, with the Sport model marking the entry point. That car will still come with 17-inch alloy wheels, twin-leather upholstery and dual-zone automatic climate control, though. Satellite navigation will also come as standard, along with a digital instrument cluster and Sport-specific LED daytime running lights with a horizontal pattern.

Sitting above that car is the S Line model, which adds some more aggressive styling, as well as its own vertical LED daytime running light signature. The S Line is also marked out by larger 18-inch alloy wheels, privacy glass and LED tail lights with dynamic ‘scrolling’ indicators. Inside, you’ll find sport seats with S Line embossing and contrast stitching, as well as upgraded inlays.

Climbing the range further still brings you to the new Edition 1 option. That car offers 19-inch alloy wheels and black exterior styling, as well as Matrix LED headlamps with digital daytime running lights. Inside, you get electrically adjustable and heated front sport seats upholstered in a combination of Alcantara and leatherette, while the driver faces a larger 12.3-inch digital instrument cluster. As the Virtual Cockpit Plus name suggests, it offers improved functionality over the lowlier versions.

Finally, the Vorsprung model marks the pinnacle of the A3 Saloon range, adding a panoramic sunroof and Nappa leather upholstery. There’s a head-up display, too, and a Bang & Olufsen audio system to boot.

At launch, this line-up will be supplemented by a choice of three engines. The basic engine wears the 35 TFSI badge, and it’s a 1.5-litre petrol unit that churns out 148 bhp. A six-speed manual gearbox is offered as standard, allowing up to 48.7 mpg.

However, a mild-hybrid version of that 1.5-litre petrol engine is also available in tandem with an automatic gearbox. By recovering energy during deceleration, the system can offer another 37 lb-ft of additional torque under acceleration from low engine speeds, as well as allowing the car to coast with the engine switched off in some situations. This means fuel economy improves slightly, to 50.4 mpg.

Similar technology will, in time, be added to a smaller 1-litre turbocharged petrol engine that will arrive at a later date, but for now the only alternative will be the 2-litre diesel engine. Badged 35 TDI and also producing 148 bhp, the engine will come with a seven-speed automatic gearbox allowing up to 62.8 mpg.

“While the A3 Sportback has traditionally been the high achiever of the A3 family in the UK, the A3 Saloon has also been quietly carving out a very respectable niche for itself,” said the director of Audi UK, Andrew Doyle.

“The well balanced design with its short overhangs and crisp lines has certainly won fans, as have the city-friendly proportions, and of course these are delivered with the same exceptional polish that has won so many plaudits in the Sportback. Fortunately the second generation car takes its predecessor’s inherent strengths, builds on them convincingly and clothes them in absolutely contemporary Audi design. It is now an even more credible partner to the Sportback that deserves to attract an even broader fan base.”