Is this some kind of autonomous TV car? What is this thing? 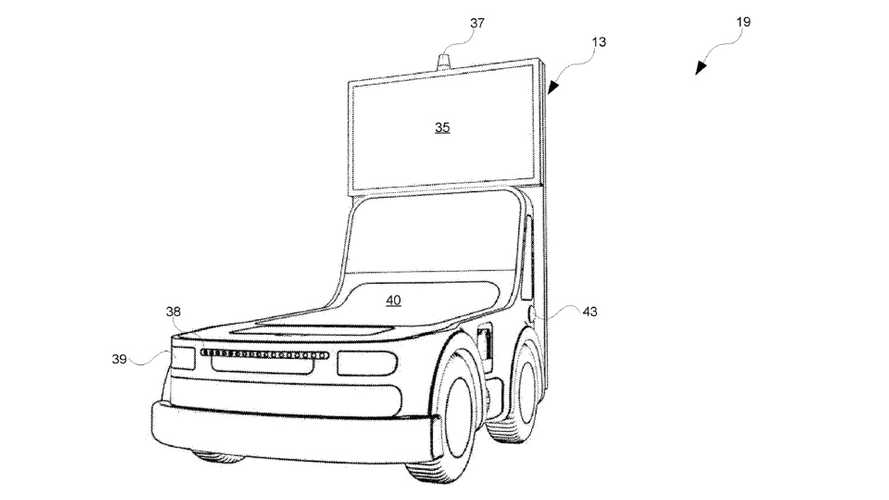 You find the weirdest things in patent applications.

Navigating the rabbit hole of online and publically available patent applications through the U.S. Patent and Trademark Office can be a very daunting task. Diligence pays off, however, as often times you can find subtle and not-so-subtle hints from automakers regarding future vehicles. And other times you come across crazy things that make you wonder.

We'll take this moment to confess that our headline is a tad sensationalist. This is not an autonomous TV car designed to keep frustrated motorists entertained during traffic jams, though perhaps we should file our own patent on that because it’s a damn good idea. No, this idea is far less interesting, but it can help keep motorists and construction workers safer along the motorway. You guessed it – this is a patent application for an unmanned, mobile emergency construction sign. Your day is now complete.

Its official title is Unmanned Roadside Signage Vehicle System, filed not by any automaker but a person named Norman Boyle from Australia. You’ll notice the title is keen to avoid calling this an autonomous system, though looking at the sketches pulled from the patent application, there are clearly no on-board controls for this vehicle.

That’s because the design calls for multiple modes of operation, which certainly can include full autonomy using a bevy of cameras, sensors, and GPS location. However, road construction takes place in all sorts of areas and some might not work well with currently available autonomous tech. In those instances, this vehicle could become a remotely operated drone.

In fact, the 32-page patent application lists all kinds of technology that could literally drive this vehicle. Power is assumed to be electric, and in addition to simply being a mobile construction billboard, the application mentions a plethora of other on-board systems and capabilities such as fire suppression. The concept also includes not just one vehicle working, but rather, a fleet of these roving signs covering a work area ready to assist construction workers and motorists.

There are certainly some major benefits to a roving sign. For starters, it gets construction workers away from the road. Static signs already serve that function around the world, but as the patent application points out, temporary work zones such as shoulder maintenance often see work crews transitioning slowing along the motorway. In essence, these roving signs could stick with the crew where the attention is needed most.

Source: US Patent And Trademark Office via Freepatentsonline.com