Porsche 911 GT3 spied with less camouflage on the Nürburgring 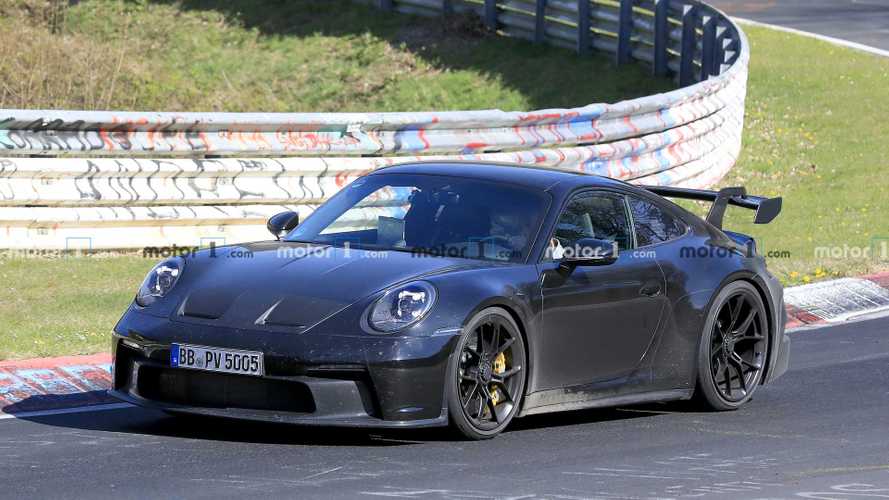 There's a new hood design with vents at the ends and a huge wing at the back.

We haven't seen spy shots of the new Porsche 911 GT3 for several months. The wait is now over because the meaner model shows up in a fresh gallery of photos. In comparison to the previous pictures, this car wears significantly less concealment.

In front, there's a much better look at the 911 GT3's new, vented bonnet. The pair of holes immediately catches the eye and communicates that this isn't your typical 911. Compared to the existing Carrera, the lower fascia on this car has a wide opening that spans much of the vehicle's width, and there are smaller inlets in the corners.

The GT3 rides on large diametre, centre-lock wheels with Y-shaped spokes. There are cross-drilled brake rotors, and the yellow calipers indicate that the discs use the company's ceramic composite material.

At the back, this vehicle provides the best look yet at the rear wing with goose-neck mounting. The exposed fasteners on it would appear to allow manual adjustment depending on how much downforce the driver wants at the back. There's also a small ducktail spoiler at the end of the rear deck.

There are two, circular exhaust tips that exit out of the centre area below the bumper. A prominent diffuser surrounds the outlets.

The new GT3 reportedly uses an upgraded version of the brand's 4.0-litre naturally aspirated flat-six engine. The tweaks allegedly push the output to around 550 bhp.

If you want this performance but more subtle styling, then spy shots indicate that a 911 GT3 Touring is on the way. It has the same bonnet design but lacks the wing on the back.

It's not clear when the 911 GT3 might debut, especially because COVID-19 is shaking up the premiere timeline throughout the auto industry.