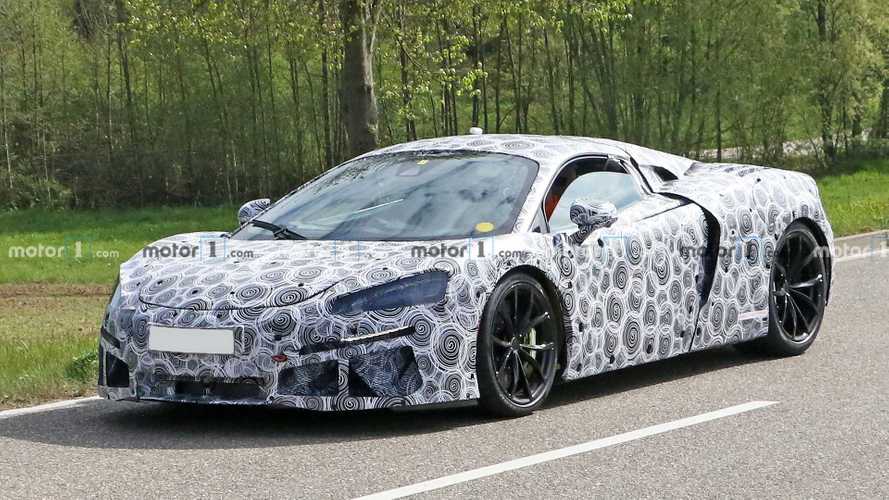 We still can’t see much, though.

Previous spy photos showed the vehicle wearing cobbled together body panels, though the latest spy photos show the model with the production body hiding under thick camouflage and cladding. It’s not clear if this will be a successor to the brand’s 570S or if it’ll become a new vehicle in the lineup altogether.

However, regardless of its position, we now have our first look at the car, and can see a bit of the design hiding underneath. The rear taillights are easily visible through the mesh, which hints that the more stylized bits are still hidden. Up at the front, we can see the headlights and LED daytime running lights. We can’t see how it compares to our rendering of what the car could look like, though, as there’s just too much cladding obscuring much of the car’s production body.

There’s also a lot we don’t know about the hybrid powertrain, though a report from earlier this month said the British automaker is developing a plug-in hybrid model that’s set to arrive sometime this year. It’d use a twin-turbocharged V6, according to the rumours, making it the only modern McLaren with anything less than eight cylinders. The company is taking what it has learned from the P1 and Speedtail hybrids to offer a mainstream McLaren hybrid. Whether this is that car or not remains to be seen. It could pair the company’s tried-and-true V8 with the hybrid system, too.

We don’t know when McLaren will reveal the 570S successor, though our spy photographers suggest it’ll be sometime next year with the new vehicle arriving as a 2022 model. That doesn’t lineup with earlier rumours of the plug-in hybrid model coming later this year, though it’s difficult to say what’s been delayed due to the coronavirus pandemic, and what else could face delays going forward.