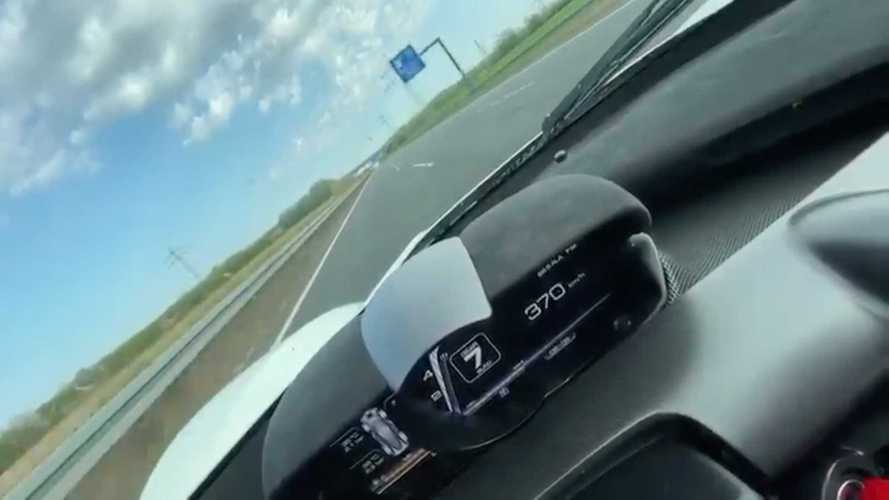 This is one fast hybrid hypercar.

The Ferrari LaFerrari arrived seven years ago, the company’s first mild hybrid hypercar. It packed a raucous 6.3-litre V12 making 789 bhp (588 kilowatts) on its own. However, when paired with the mild-hybrid system, it created a combined output of 950 bhp (708 kW).

The potent powerplant could rocket the Italian supercar to 62 miles per hour (100 kilometres per hour) in less than three seconds. A new video shared on Instagram shows the powerful Ferrari hitting an unrestricted portion of the German Autobahn – and it’s fast.

The video shows a white Ferrari LaFerrari, already accelerating past 135 mph (217 kph), the V12’s exhaust note screaming, as the driver really lays into the accelerator pedal. The Ferrari breezes past 155 mph (250 kph) and 186 mph (300 kph). Acceleration starts to slow around 205 mph (330 kph) after the car shifts into seventh gear.

Slowly, the Ferrari’s speed creeps upward, passing the car’s claimed top speed of 217 mph (349 kph). And it keeps accelerating past 217 mph and 224 mph (360 kph), where it finally tops out at 231 mph (372 kph, where the video ends. It’s challenging to get a sense of the Ferrari’s speed. The motorway is sparsely packed – only a handful of cars and HGVs are passed – and even then, it doesn’t appear as if the Ferrari is travelling that fast. The speedometer tells the truth, though.

1,239-bhp Toyota Supra accelerates like a rocket on the Autobahn
⠀

Ferrari ended LaFerrari production in 2016, which was when the company began producing the open-top Ferrari LaFerrari Aperta. The Aperta had a few improvements over the regular LaFerrari, though it retained the original’s svelte shape and styling. But neither were slouches, and both helped usher in a new era of hypercars that blended the raw power of Ferrari’s internal combustion engine with batteries. Today, we have the Ferrari SF90 Stradale – a plug-in hybrid Ferrari that can hit 62 mph in just 2.5 seconds. Talk about a revolution.