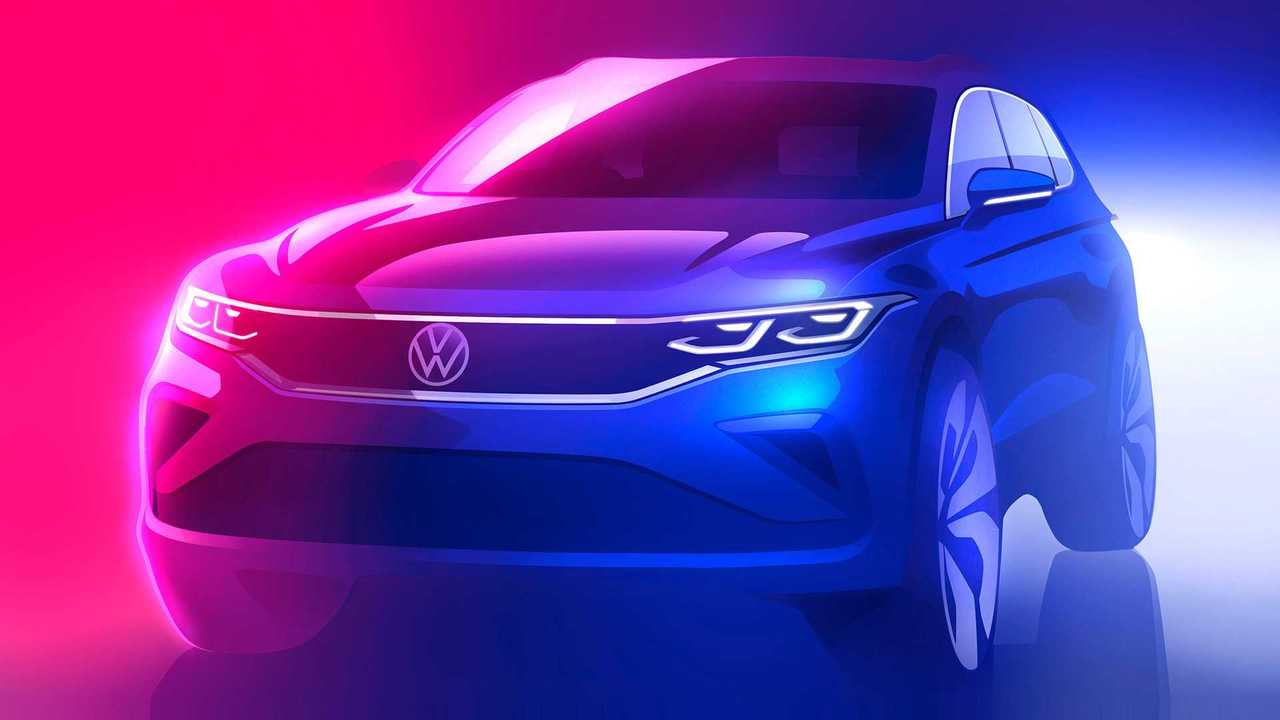 Volkswagen’s best-selling vehicle might get more power to go along with its updated styling.

The Volkswagen Tiguan is hugely important for the automaker, serving as its best-selling vehicle globally. As such, VW is planning a facelift for the 2021 model year, giving the Tiguan some styling changes and additional features to keep it relevant.

Details on the 2021 VW Tiguan are sparse. The automaker did release a teaser image of the new SUV, showing an entirely new front fascia that does a good job of emulating the American Jetta and Atlas Cross Sport. The current Tiguan’s grille and headlights are the same width, but the facelift will swap in thinner, more aggressive lighting elements and a deeper, almost shield-like grille. An A-line lower air intake recalls the Jetta GLI, bookended by two nacelles that might be used as air curtains or foglight surrounds. The revised Volkswagen logo receives prominent billing on the front end.

Also coming to the revised 2021 Tiguan will be a new infotainment system, called MIB3. We don’t know too many specifics, but VW did admit the new Tig will feature over-the-air software updates, and it’ll continue to offer in-car Wi-Fi connectivity. There should be other interior updates, including a new steering wheel (currently found on the Atlas Cross Sport) and potentially some material upgrades.

In a roundtable discussion with other news outlets, VW representatives said the next Tiguan will emphasise sporty, on-road–oriented styling even more than the current model, particularly when equipped with the R-Line appearance package. According to the company, off-road accessories and market positioning are a better fit for the Atlas, and it’s possible the forthcoming sub-Tiguan entry-level SUV would get some all-terrain–inspired styling and features as well.

As always, the 2021 VW Tiguan will offer 4Motion all-wheel drive as an option, which is what most customers opt for. It’s not clear at the moment whether the facelifted Tig will back up its more aggressive styling with a sportier engine option. In the UK, we’re currently privy to a 1.5-litre TSI that makes 148 bhp (110 kilowatts), backed up by an six-speed manual gearbox. Although those numbers are class-competitive, the 2020 Tiguan nevertheless feels a bit lethargic at times.

VW reps said the company is investigating powertrains that are more powerful, but it sounds like we’ll have to stick with the existing engine for the time being. Of course, there’s bountiful evidence that a Tiguan R is on its way, but VW said that model is currently riding on the global short-wheelbase Tiguan model, which isn’t available in all markets.

The 2021 VW Tiguan will take its first official bow this summer, and we expect it to arrive in UK showrooms before the end of the year.