Volkswagen Arteon R spied working out at the Nürburgring 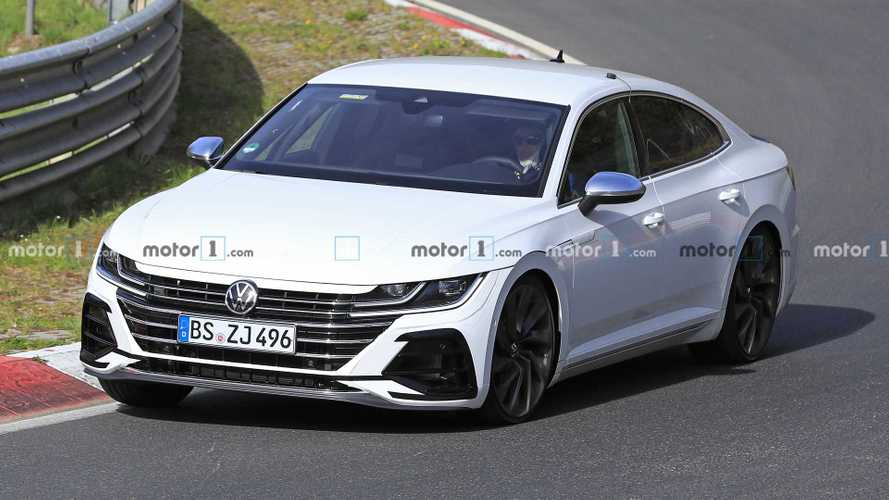 This one wears very light camouflage.

The Volkswagen Arteon R will give the brand's stylish saloon a major performance upgrade. These shots catch a development vehicle lapping the Nürburgring. The car wears very light camouflage, so it should be a good indication of what to expect from the styling when the model finally arrives in showrooms.

In front, Volkswagen engineers use some white tape on the front fascia to conceal the shape. It appears only to cover a seam, though. Compared to the existing Arteon, the openings in the corners are larger on this vehicle.

Along the sides, this saloon has blue brake calipers. It rides on gunmetal colour wheels with a turbine-like shape for the spokes. The dark colour offers a great contrast to this vehicle's white body.

At the back, there's a tiny, black spoiler on the boot lip. The company has panels over each side of the rear bumper to conceal something underneath them. A pair of trapezoidal exhaust outlets come out of each corner below the bumper.

Are you ready for an Arteon R:

Earlier reports suggested the Arteon R used a new, turbocharged 3.0-litre VR6 engine making around 404 bhp (301 kilowatts). However, our spies now believe the model would use the 2.0-litre turbocharged four-cylinder from the new Golf R that reportedly makes 330 bhp (246 kW). The power would run through a seven-speed dual-clutch gearbox to an all-wheel-drive system.

There's bad news for Americans interested in the Arteon R because a recent report indicates the model isn't coming to the United States. Customers in Europe and China should be able to pick one up, though. Look for a debut before the end of the year, but the coronavirus pandemic makes the exact timing difficult to predict. A estate version is eventually coming, too.