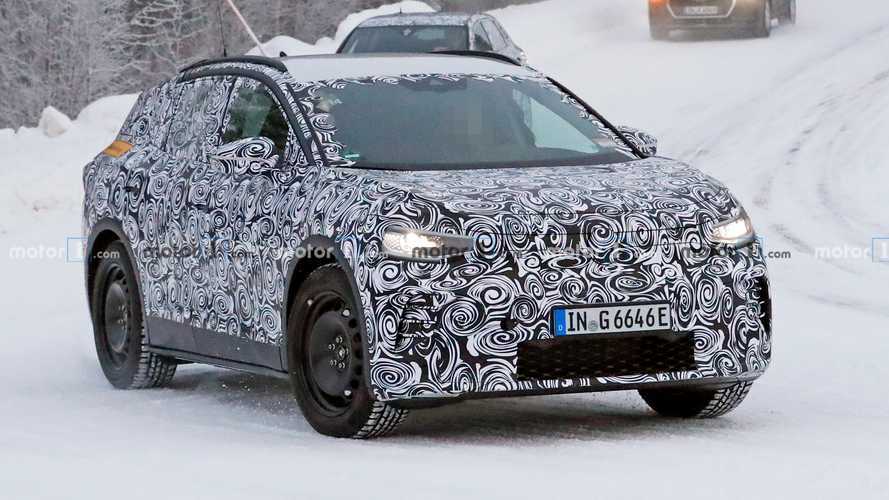 The Audi shares its architecture with the VW ID.4.

Audi revealed its Q4 E-Tron concept at the 2019 Geneva Motor Show, previewing a small electrified crossover. It will join Audi’s lineup sometime in late 2020 or early 2021, and the German automaker is charging full steam ahead on its development.

New spy photos show the crossover cold-weather testing in northern Sweden, though you wouldn’t be mistaken to think this is a VW ID.4 rather than the Audi. The two will share the same MEB architecture, and our intrepid spy photographers confirmed with a test driver that the car is indeed the Audi Q4 E-Tron with the ID.4 body. The Audi will look distinct when from the VW when it arrives.

We learned the test vehicle packs two electric motors – one powering the front axle and the other powering the rear. Audi’s tried-and-true Quattro all-wheel-drive continues. While the Q4 E-Tron and VW ID.4 will ride on the same architecture, and sport similar greenhouse shapes, the two will have distinct styling. Last summer, Audi revealed the Q4 E-Tron would arrive with 25 ways to customise its headlights and taillights, allowing owners to personalise their vehicles further.

When Audi teased the new crossover last year, it announced the E-Tron would come with an 82-kW battery providing an Audi-claimed 280 miles (450 kilometres) of range while putting out around 300 bhp (224 kilowatts). It’ll feature fast charging that’ll replenish 80 percent of the battery in just 30 minutes. Audi also claims the crossover should run to 60 miles per hour (96 kilometres per hour) in 6.3 seconds.

The Audi Q4 E-Tron will slot between the Q4 and Q5, though due to its EV layout, it should offer more interior space than the Q5. The Q4 E-Tron is an integral part of the company’s future electrification strategy, which hopes to find success in the crossover and SUV arena as that’s where today’s consumers congregate. However, now more than ever, the future of the auto industry feels a bit uncertain as the coronavirus pandemic continues to affect most of the world. We hope the Q4 E-Tron doesn’t face any delays.