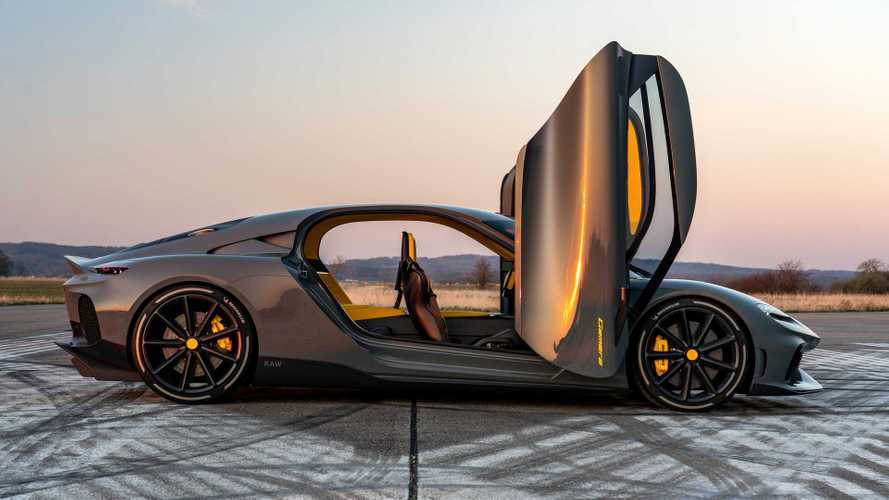 Koenigsegg took the not-a-Geneva-Motor-Show by storm last month with the unveiling of the Gemera, a fully fledged hypercar that happens to have two rear seats. More practical than the Speedtail and its nifty F1-esque three-seat layout, the Gemera likely offers the fastest way to haul your significant other and two kids. Speaking of McLaren, North Carolina-based McLaren Charlotte has Sweden’s first four-seater model for sale.

Mind you, production of the Gemera hasn’t started, so what the dealer is actually selling is a build slot. Koenigsegg has said only 300 examples of its high-performance grand tourer will be produced, and while the listing doesn’t mention the price tag, we do know the company’s head honcho Christian von Koenigsegg told Top Gear the U.S.-spec model would carry an eye-watering starting price of $1.7 million (approx. £1.35 million).

The Gemera is listed by the dealer with a grey paint and an orange interior, which could mean the build slot is for a spec similar to the showcar. It apparently carries the VIN 001 number and that would imply McLaren Charlotte has managed to secure the very first production car, provided the listing is entirely accurate.

Build slot aside, the Koenigsegg Gemera is shaping up to be a remarkable car beyond its four-seat layout made possible by the unusually long wheelbase of 3 metres (118.1 inches). It’s powered by a three-cylinder (yes, a three-pot) 2.0-litre petrol engine producing 600 bhp and 442 pound-feet (600 Newton-meters) of torque while working with three electric motors – one on the crankshaft and one for each rear wheel for a combined 1,700 bhp and a whopping 2,580 lb-ft (3,498 Nm).

The Koenigsegg Gemera has more cupholders than a Nissan Qashqai

Despite being large enough to carry four adults, the Gemera is still a rocket, needing a mere 1.9 seconds to hit 62 mph (100 km/h) on its way to 250 mph (402 km/h) in “record-matching pace.” That’s mighty impressive considering the company is targeting a dry weight of 1,715 kilograms (3,781 pounds) by going with a smaller 15-kWh battery pack and a tiny combustion engine weighing just 70 kg (154 lbs). Had it been fully electric, Christian von Koenigsegg says it would’ve tipped the scales at around 2,300 kg (5,070 lbs) due to larger batteries.

As if all of these feats were not impressive enough, the family-friendly Koenigsegg can also work as an EV for 31 miles (50 kilometres) and has a total range of 621 miles (1,000 km) with the petrol tank full and the battery pack completely charged.