Blink and you'll miss it.

The coronavirus pandemic has cleared out the usual volume of vehicles on plight because of the imposed quarantine and lockdown on most parts of the world. Still, that's not an excuse for us to drive wildly whenever we get the chance to hit the road. Worse, it is not a license to drink and drive.

But still, some people just don't get it, as seen in this accident that happened in Poland last Easter Sunday. A Suzuki Swift got involved in a horrifying crash after missing a roundabout. You can watch the actual CCTV footage of the incident on the video embedded on top of this page, courtesy of Telewizja Aleksandrów Łódzki.

According to Polish Radio SA, the Swift was running at high speed as it approaches a roundabout. Unfortunately, the driver missed the turn and ramped through the rotunda's gutter, launching the Swift into the air like a stunt car.

The car hit buildings on a cemetery and landed on the property. As you can see in the image provided by the police, the car was completely wrecked. The crash was so horrible, in fact, firefighters had to cut out the 41-year-old driver to get out of the vehicle. He was transported into a nearby hospital. 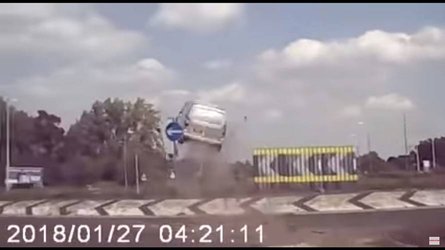 Watch this van get insane air after crashing into roundabout 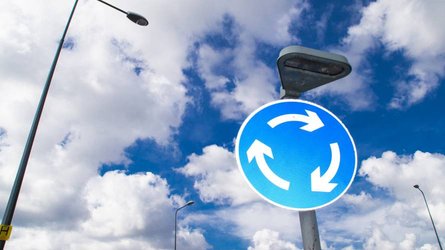 More than half of UK drivers don't know the roundabout sign

The police suspect that the driver was under the influence of alcohol as there was a smell of the substance as he was taken out of the vehicle. The authorities are conducting a blood test at the time of this writing.

Again, let this serve as a reminder that driving under the influence of alcohol will never be okay. It will not only endanger your own life but the lives of others, as well.