The newcomer is designed to "reflect the joy and glamour of motoring in the 1970s".

Small British sports car manufacturer Caterham has revealed a new “retro-inspired” version of its classic Seven two-seat roadster. Dubbed the Super Seven 1600, the car is designed to be the most powerful of Caterham’s ‘heritage’ models, which currently include the Sprint and Super Sprint models.

Those cars, which were launched in 2016 and 2017 respectively, are inspired by the “craftsmanship” of the original Super Seven and Caterham’s earlier models. As such, they and the new Super Seven 1600, come with a host of retro details and styling tweaks. 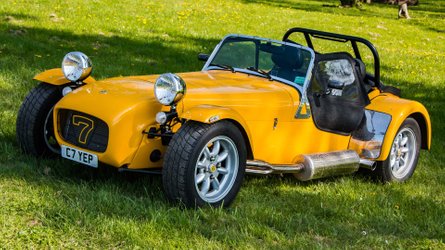 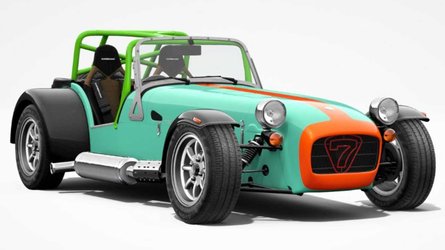 The Super Seven, then, comes with flared front wings, retro 14” alloy wheels and a spare wheel mounted on a rear carrier, which is supposed to evoke images of the ‘touring’ Sevens. The cars also get a choice of heritage paint finishes. Inside, meanwhile, the car gets a wooden-rimmed steering wheel and tailored leather upholstery to maintain the classic image.

Under the skin, though, the car gets some modern upgrades, including the choice of two chassis. The new-for-2020 car is the first model to be offered with the larger SV chassis, as well as the standard S3 chassis.

Power comes from a 1.6-litre Ford engine, which produces 135 bhp. That motor, paired with a five-speed manual gearbox, allows the lightweight sports car to get from a standstill to 60 mph in five seconds, while the top speed is 122 mph. The drivetrain also gets DCOE throttle body injection inspired by period rally cars and providing a trademark ‘growl’ sound.

Prices start at £33,495 for a car in component form, while having the car built by the factory will cost an extra £2,395. Other options include the fitment of a limited-slip differential, firmer suspension and upgraded brakes.

“Caterham has always been about individuality and the quality engineering that makes the Seven peerless when it comes to the driving experience,” said Caterham’s CEO, Graham Macdonald. “Ownership of any specification of Caterham Seven is a mark of distinction and a ticket to driving adventure, but our heritage line of models holds a special place in the hearts of the true brand enthusiasts. Both of our most recent retro-inspired Sevens – the Sprint and Super Sprint – sold out in record time so we know the appeal for these cars is strong.

“We’re excited to introduce the most powerful Super Seven ever built, a reimagining of a true modern icon, delivering exactly what the original was designed to offer – a focus on driving feel and race-inspired upgrades but with some touches of luxury to the finishes.”