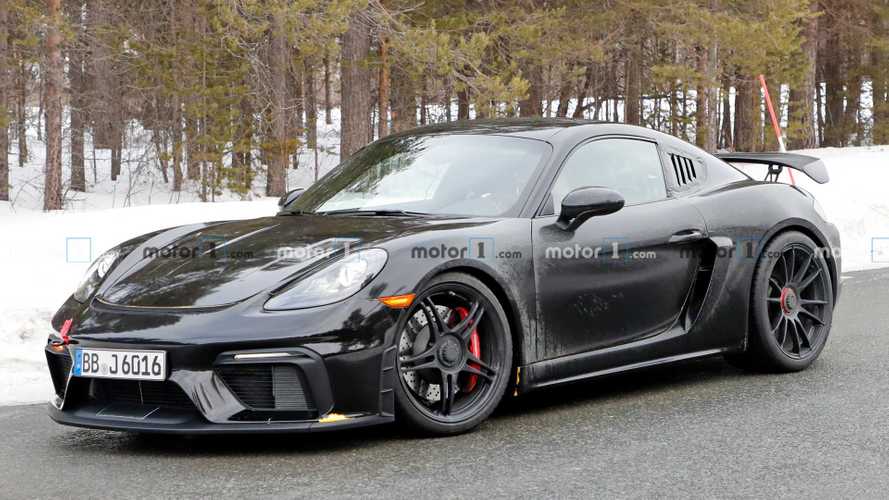 Porsche is preparing to expand the 718 Cayman lineup beyond the already hot GT4. The German automaker is giving the GT4 the RS treatment, which should mean even more power will be on tap from the agile sports car. How much? A new report from Car and Driver says the GT4 RS will arrive with close to 500 bhp (373 kilowatts). That’s a sizeable increase over the 414 bhp (309 kW) available in the regular GT4.

Car and Driver’s report doesn’t say how Porsche will increase the GT4’s output. However, the publication notes the RS’s engine will have the same 4.0 litres of displacement as the GT4's mill. Rumours suggested the GT4 RS would use a tuned version of the same 4.0-litre engine, which does make sense. We don’t have any indication which gearboxes will be available.

Porsche 718 Cayman GT4 RS spied covered up in the cold

Our spy photographers have captured various GT4 RS test vehicles out and about, and it looks a lot like the GT4. Early spy photos showed the car with a massive rear wing, though recent test vehicles seem to be missing the part, instead, using the same piece found on the current vehicle. There should be more openings for increased airflow and other tuned exterior bits that aid in aerodynamics and cooling.

One thing that shouldn’t change much is the car’s suspension bits. The GT4 already borrows heavily from the 911 GT3. Car and Driver believes that if there are any changes, Porsche will make the suspension stiffer and lighter, two things that can help improve the car’s driving dynamics and handling.