Mazda marks centennial with Anniversary Edition for many models 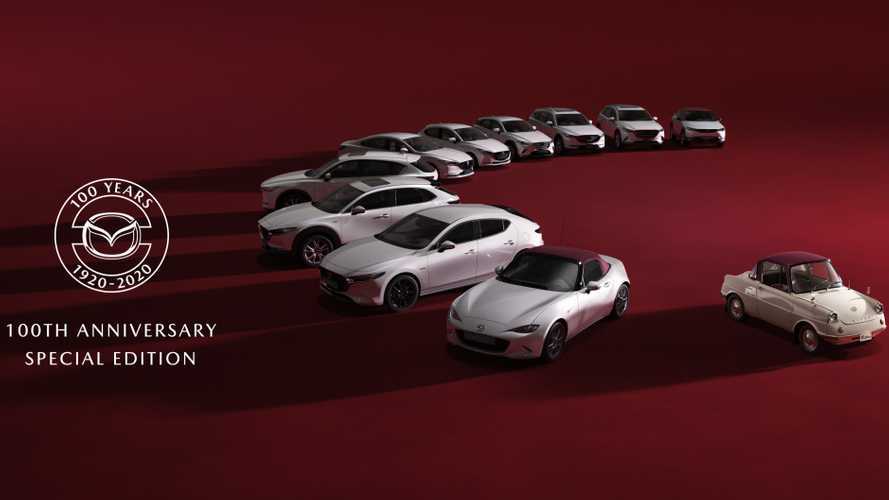 Mazda started out in life precisely on January 30, 1920 as Hiroshima-based Toyo Cork Kogyo Co., Ltd, before dropping "Cork" from its name seven years later. In 1929, the Zoom-Zoom company built a prototype for a 250cc two-stroke engine and started the production of Toyo machine tools.

In 1930, six prototype motorcycles were produced, with Mazda eventually building 30 more for customers. Also that year, a new factory was built on a previous salt farm where the company also established its headquarters.

Three-wheel truck production kicked off in 1931, and four years later the company started making rock drills and gauge blocks. Several three-wheel trucks followed that decade, along with a sidecar motorcycle launched in 1939. A year later, Mazda built a prototype for a small passenger car, while in 1950 a three-wheel, six-seater passenger car called “Tye-PB” was introduced with a 701cc engine. Also in 1950, a Type-CA four-wheel truck with a one-ton load capacity hit the market, while in 1954 the company redesigned all of its three-wheel trucks. In 1959, an adorable K360 tiny three-wheel pickup truck was launched with a puny 356cc engine and a load capacity of just 300 kilograms.

It wasn’t until 1960 when Mazda introduced its first proper passenger car, the R360 Coupe. The four-seater, two-door model equipped with a mighty 356cc air-cooled 16-bhp engine was offered with an automatic transmission and was an instant hit due to its affordable price tag of 300,000 yen and excellent fuel economy. This cute car has now served as inspiration for several anniversary editions of Mazda’s current models to celebrate the company’s centenary.

The 100th Anniversary lineup consists of the Mazda2, Mazda3, Mazda6, MX-5, MX-5 RF, CX-3, CX-30, MX-30, and the CX-5. All the cars share the Snow Flake White Pearl Mica paint and have an assortment of “100th Anniversary” logos along with burgundy floor carpets. These models also have a fancy key fob embossed with the aforementioned logo and are delivered inside a limited-run special box.

Mazda is already taking orders at home in Japan for the Centenary models and will sell them in Europe from this fall.

There had been some rumours (from 2014) about a new rotary sports car due in 2020 to celebrate the brand’s centenary, but it looks like that’s not going to happen. The rotary engine is coming back, but only as a range extender to increase the driving range of an EV. Mazda has claimed it’s in a “race against time” to build a new RX, and while it hasn’t given up on the idea, the future looks uncertain. A wild rumour alleges a next-generation RX is planned, but with a turbocharged inline-six instead of a rotary engine. That would likely be called something else since “RX” wouldn’t make much sense.

To mark the 100th Anniversary of the business, Mazda has launched a special edition, available across its entire range1, that celebrates the uniqueness of its first passenger car, the R360 Coupe.

Many of characteristics of the R360 Coupe, such as industry leading technology, attention to design details and a great driving experience, still underpin every Mazda car today, delighting fans around the world.

The anniversary editions will feature the white and burgundy two-tone colour that made the R360 Coupe such a hit when it launched in 1960 and feature several unique 100th Anniversary elements.

The R360 Coupe was Mazda’s first passenger vehicle and was an immediate success with drivers due to its unique, futuristic styling, great handling and competitive pricing, giving many people their first experience of the freedom of car ownership.  The car had a four-cycle engine, unprecedented in micro-mini passenger cars of the time, automatic transmission and a focus on weight reduction to enhance driver enjoyment, a characteristic of all Mazda cars today.

Across the entire Mazda range, customers will be able to select their anniversary models with the two-tone burgundy and white, plus many unique details including the unique hubcaps featuring the 100th Anniversary logo.

The Special editions will feature:

The Special edition models went on sale today in Japan and will be available for customer order across Europe starting from autumn 2020.