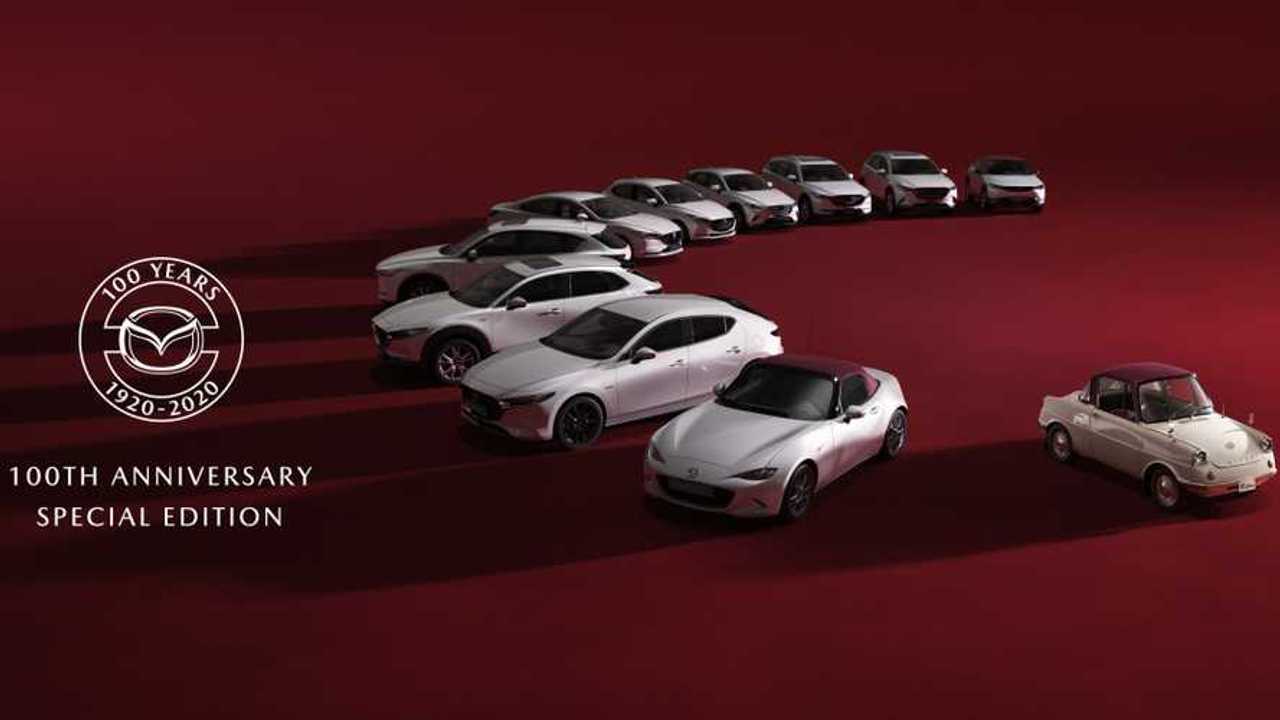 The UK will get limited-edition versions of the MX-5 Convertible, CX-30 and Mazda3.

Mazda has announced the introduction of new special-edition models across its range, as the company celebrates its 100th anniversary. Boasting white-and-burgundy two-tone colour schemes, the cars are inspired by high-grade versions of Mazda’s first passenger car: the Mazda R360 Coupe.

The cars were originally intended to be revealed at the Geneva Motor Show last month, but the cancellation of the show just days before the doors opened put paid to that plan. Instead, the firm has unveiled the cars in its home country of Japan, where the first cars are already available to pre-order.

There, the company has launched special versions of the Mazda2, Mazda3 and CX-3, as well as the CX-30, CX-5, CX-8, Mazda6 and MX-5 in both Convertible and RF folding hard-top guises. Those cars will be offered in Japan through to the end of March 2021.

Each car will get Snowflake White Pearlescent exterior paint contrasted with burgundy interior carpet and leather seats, as well as a host of bespoke touches. There’s unique 100th Anniversary badge featuring on the burgundy floormats, as well as on the key fob and embossed into the headrests. The same badge also features on the wheel centres and the side of the car. The 100th Anniversary MX-5 Convertible, meanwhile, adds to this with Dark Cherry fabric roof.

These features pay tribute to the Mazda R360, a micro-car that was launched in 1960, 40 years after the company was originally founded as a cork firm in 1920. The high-spec R360 came with a red-and-white colour combination that has been reflected in the new special editions.

But although the 100th Anniversary models are being offered across the range in Japan, buyers in the UK will only be able to order the 100th Anniversary MX-5 soft-top, as well as the CX-30 and Mazda3 models. Those cars will go on sale later this year, with pricing yet to be confirmed. However, Mazda has said it will consider 100th Anniversary versions of the larger Mazda6 and CX-5 models.

“Mazda Corporation has created these special models as a token of appreciation for the customers who have supported Mazda through the years,” said Mazda UK’s managing director, Jeremy Thomson. “We’ll be proud to have special versions of the MX-5 Convertible, CX-30 and Mazda3 in our UK showrooms later this year. UK buyers have always loved special edition MX-5s so I’m sure that with its distinctive cherry roof and burgundy interior, the 100th Anniversary Special Edition Convertible will be very popular, while the first opportunity to have distinctive limited-edition versions of our latest cars: the Mazda3 and Mazda CX-30 is equally exciting”.

“Mazdas have been sold in the UK for over 50 years and today, just as in the past, UK owners love the style, quality and driver involvement of our cars. Since the inception of Mazda UK in 2001 we’ve sold more than 795,000 cars in the UK, so it’s great to be able to celebrate the centenary of Mazda Corporation by offering these special models, at the same time as looking forward to our exciting future, including the launch early in 2021 of our first electric vehicle: the Mazda MX-30.”